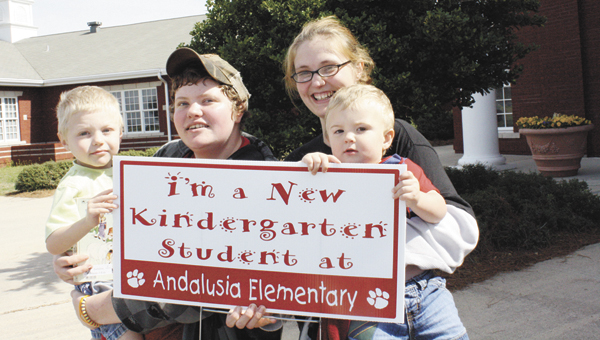 Ryan Watson was one of the children registered Wednesday for the upcoming school year at AES. Watson is shown with family friend Harper Paulk and his mother Jennifer Childree and brother Alexander Childree. | Stephanie Nelson/Star-News

The presence of the child is encouraged at registration, but not mandatory.

School officials said parents need to bring a birth certificate and a blue immunization card only.

“The child has to be present,” said Brenda Johnson, counselor. “We do screening. It is fashioned after DIBELS. They’ll check their numerical skills, initial sounds and vocabulary, things like that.”

Johnson said before funding was cut the school was able to offer T-shirts and goody bags for the students, but the school is unable to do that this year.

• Pleasant Home will round out the registration process on April 29, at 8 a.m.

For more information, contact the guidance counselor at the respective school.

To register, parents must bring the following:

• an original Social Security card; and

The City of Florala is working toward establishing a city pound, which city officials say would help address the city’s... read more