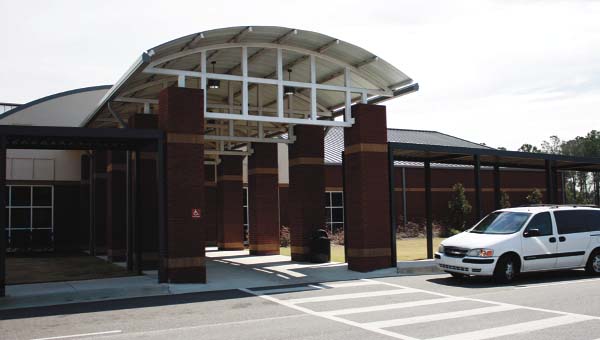 Some parents elected to pick up their children following the school’s lockdown.

An Opp man is in custody after he allegedly made threats against an Opp City Schools staff member, prompting an hour-long lockdown at Opp Elementary School.

Christopher Kip Jacobs, 41, is currently being held on a bond revocation after he allegedly threatened to harm a family member.

Police Chief Nickey Carnley said Jacobs was in a Navarre, Fla., rehab facility and had been picked up by family on Monday when the events began.

Carnley said the details surrounding the case are “sketchy” and investigators are working to sort through them.

“We have a lot of hearsay, we need to look into,” he said.

Carnley said that while the family was traveling back to Covington County, the Jacobs’ father got out of the vehicle.

“There was concern from family members that (Jacobs) has made statements about harming another family member,” he said.

Carnley said the family member is an employee at OES, but would not say in what capacity.

“The family then notified the OES employee,” he said. “The employee was concerned that Jacobs was on the way to OES and notified police.”

“The initial call said he was (at OES), but when officers were en route, we found out he was actually on his way from Navarre,” Carnley said.

“We also set up surveillance at the parents’ residence in Opp, Jacobs’ Babbie residence and his sister’s residence,” Carnley said. “We arrested Jacobs on Brantley Street with his mother in the vehicle with him.”

Carnley said that Jacobs was out on bond from charges from the county.

Star-News archives indicate Jacobs was arrested in January and charged with third-degree domestic violence. He was released then on a $25,000 bond.

“We notified the district attorney of the matter, and he filed to have the bond revoked with Judge Trippy McGuire,” Carnley said. “He was arrested on bond revocation.”

Carnley said Jacobs has not been charged with any additional crimes, until investigators can sort through the details.