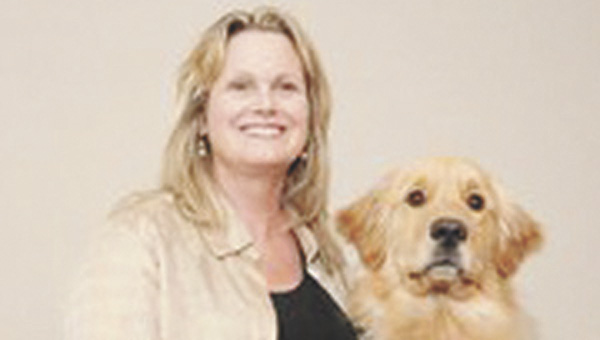 Wanda Scroggins is shown with Harley, her male golden retriever, who is a leader dog for the blind. | Courtesy photo

In her own words, Sunday was a dark day for a visually impaired Florala woman after her seeing eye dog ran away from home.

Monday was much brighter as the animal, along with a fellow companion dog, were returned home.

Wanda Scroggins, a North Creek Community resident, is legally blind. She uses the animals to help her navigate the world. Harley, a male golden retriever, is a Leader Dog for the blind. He has been Scroggins’ companion for just over two weeks. He and Thea, a companion dog, escaped from Scroggins’ front door Sunday.

“I have 2 1/2 –year-old twin grandsons who left the front door open,” Scroggins said. “We noticed the dogs were missing about 11 a.m.”

Scroggins and family members immediately began a search, even going so far as to report the loss to the Covington County Sheriff’s Office. The dogs’ disappearance made news on various media outlets. Even postings on the social media Web site, Facebook, were utilized in an attempt to bring the animals safely home.

“The whole experience gave me chill bumps,” she said. “To me, those dogs represent independence and freedom for a safe journey for me. They’re constant companions. They open a dark world for me. When you have a cane, you’re guessing at what you come across.

“A guide dog, with their eyes and their reasoning power, they can take you safely wherever you want to go,” she said. “I praise the community for their awareness and their concern.

“The Lord heard those prayers, and got my dogs back to me,” she said.

The animals were located in the Red Oak Community, located about seven miles from Scroggins’ home, around 6 p.m. Monday.

“Brent Zessin (the principal at W.S. Harlan Elementary School) found them,” she said. “He called the 1-800 number on Harley’s tag. I called him, and he brought (the dogs) home. I can’t say ‘thank you’ enough.”

Scroggins is a motivational speaker and is also an organizer of a low-vision and blind outreach group, which meets at 1 p.m. at the Andalusia Public Library on the first and third Thursday of each month.

The National Weather Service in Mobile has issued a flash flood watch through this afternoon for Covington County. There is... read more