Habitat build to begin April, May 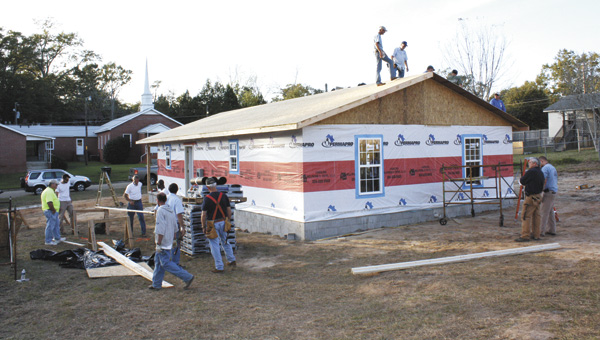 Habitat for Humanity will begin work on a new Florala home in the coming months. Above: Volunteers work to dry in a previous home built in Andalusia. | File photo

The Covington County Chapter of Habitat for Humanity will begin its next building sometime in “April/May” in Florala, said chapter president Dale “Flip” Pancake.

Pancake, who addressed members of the Andalusia Lions Club Wednesday, said the announcement was the first of two that were “good news” for the local chapter.

“We’ve also gotten word the chapter has received a grant from the Federal Home Loan Bank of Atlanta that takes $10,000 off the mortgage of our next four houses,” Pancake said. “That is a blessing on two fronts – one, it reduces the amount the homeowner has to repay; and two, that $10,000 is then given back to the affiliate for the next build. It’s like $10,000 in our pocket to put into the next house.”

The $40,000 grant given to the local chapter is part of $6 million awarded to assist 19 other affordable funding developments in Alabama.

At present, there are two local families ready for the upcoming HFH builds, Pancake said.

“We have one in Florala and another in Opp,” he said. “Both have worked very hard to get their sweat equity hours in, and they’re ready to see the builds begin.

“It looks like as soon as we get the paperwork squared away in Florala, we’ll be ready to start building,” he said. “It looks like that should be sometime in April-May.”

A site on Florala’s Cypress Street has been chosen as the next Habitat location, and city officials are finishing the process of deeding the property over to the local Habitat chapter.

The local chapter will also begin the family selection process again in April, he said.

“We’ll start hosting those family selection meetings and get the process going again,” he said.

Families must meet certain requirements to qualify for a Habitat Home, including an income requirement. The family selection committee is responsible for evaluating the applicants and choosing a Habitat family.

He said most of the funding is in place to cover the cost of the next Habitat building.

“However, we’re always needing donations,” he said. “We’ve had a great response from the $10 Club, local civic groups, churches and individuals. Donations are always welcome.”

The $10 Club is Andalusia’s First Methodist Church drive for people to pledge $10 a month for a year. Participation is ongoing.

The National Weather Service’s “new way” of issuing watches and warnings may have had residents confused as sirens went off... read more