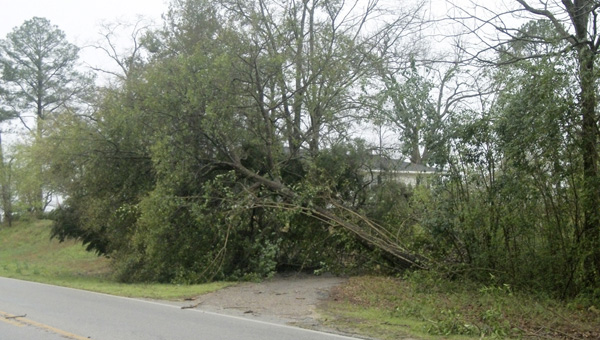 After the Wednesday’s storm system, some flooding was apparent in places throughout the county. Shown above: Rains caused flooding on Hwy. 55 near the Portemont estate. | Stephanie Nelson/Star-News

Throughout the day, multiple warnings and watches were issued as thunderstorms, heavy winds and lightning hit the county.

Harris said several trees and power lines were reported down as the storm made its way through the area. Andalusia Elementary School suffered some minor damage to its roof, and rains covered roadways throughout Andalusia. Luckily, no major damage was reported locally from anywhere in the county, Harris said.

“Mobile Weather was really watching some (tornadic) rotations in the air between Andalusia and the Carolina Community at one point and several times in the northwest corner of the county,” she said. “Looking at the EMA computer system, we were lucky because there were some areas of the state that received a lot damage.”

Mobile and Baldwin counties reported possible tornado touchdowns. Heavy rains produced flash flooding in areas as far north as DeKalb County and as far south as Conecuh County. Seventeen Alabama counties have reported some type of storm damage according to the state EMA agency, and as a result, Gov. Robert Bentley has declared a statewide state of emergency.

By declaring a state of emergency, the governor authorizes the state EMA to assist communities, make the appropriate assessments of damage and seek state and federal assistance for the affected areas.

Harris said it’s imperative locals report any and all damage received to their property.

“We don’t have damage locally to qualify for FEMA funds, but by us reporting what we have here, it could impact the state damage total,” she said. “That’s why it’s important to let EMA know.”

Habitat build to begin April, May