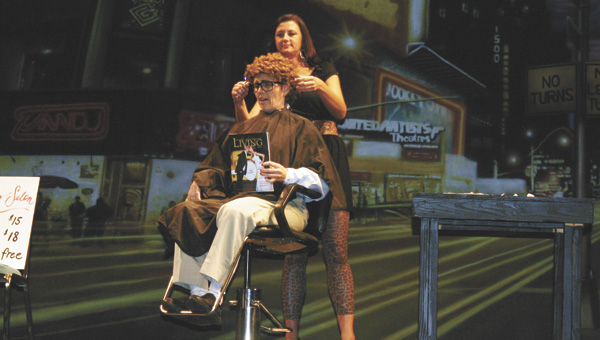 From Lady Gaga’s appearance a la Carol Burnette in Springdale “draperies” to the dance moves of a not-so-somber judge, the Andalusia Junior Woman’s Club delivered laughs galore at the LBW Dixon Center last night.
Kim and Kyle Baumgartner, whose running spoofs have been among the highlights of the show in recent years, delighted as the celebrity hosts of “Andalusia Night Live.” With Kim as Lady Gaga and Kyle as Justin Timberlake, the couple didn’t disappoint their fans. From Kim’s four costume changes to Kyle’s “present” wrapped by the ladies at Ansley Place, the couple kept the audience in stitches. “Lady Gaga,” complete with a birthday cake headdress, quipped that one thing she loves about Andalusia is “no one judges you by how you look.”
When “Lady Gaga” appeared wearing draperies, she explained that she was driving down East Three Notch when she was inspired by the idea for her creative outfit.
Saturday Night Live fans saw many of their favorite characters on stage as the AJWC brought ANL to the local stage.
Springdale also took a ribbing during a “Weekend Update” skit, delivered by Terry Jones and Jason Goldman, assisted by Jana McGlamory.
The newscasters announced that Springdale has inspired a Central Park development in Andalusia, complete with many of the features from New York City’s Central Park, including “a place for homeless people to sleep.” When they “updated” the 2012 presidential race, they somberly reported that the River Falls Street project would also still be under way then.
And the sponsoring club itself also got a jab when McGlamory, in the Weekend Update, posed the question “What is a junior woman, anyway? Some of the members don’t look junior to me.”
Jones and Tara Dalton parodied the SNL  “It’s Pat” skit with Jones as a J.K. Salon employee helping an androngynous Dalton prepare for the annual Booster Ball, “you know, the Andalusia Country Club prom.”
Claire Walters perfectly spoofed SNL’s Mary Katherine Gallagher, complete with boarding school uniform and stage ambition.
The Ritz Crackers – Ben Brannon, Parrish King, Ben Bowden, Steve Thomas, Wade Cotton, Jeffrey Douglas,  Shannon Glenn and Hunter Hobson – costumed as celebrities ranging from Michael Jackson (Glenn) to a young, and thin, Elvis (Douglas) took the audience down a memory lane of dance moves.
The show also features musical performances by Sisters by Grace, South Bound River, Jeff  Sellers and Lynsey Dubose, and Ted Watson.
AJWC will present Red Garter Review again tonight at 7. Tickets, which are $12, are available at the door.

Illusionist to perform at LBW next week

She’s been called “a lady Houdini,” and she will regale Covington County residents with her amazing feats of escape this... read more