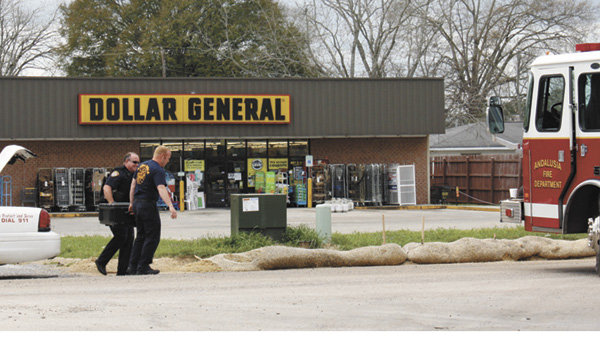 A suspicious briefcase found at one of Andalusia’s three Dollar General stores Monday was treated as a bomb threat, prompting officials to evacuate the store and block traffic.

Investigator Jason Curry of the Andalusia Police Department said officers were dispatched to the River Falls Street store at approximately 11 a.m. in reference to a suspicious briefcase.

“We got a call that it was found in a buggy outside the store,” Curry said. “(Store employees) didn’t know what was in it or how it got there, so to be on the safe side, we decided to treat it as a threat.”

Store personnel were evacuated to the Covington Mall parking lot, and the APD demolitions officer was called in to dispose of the briefcase.

For more than an hour, preparations were made to safely discharge the briefcase. Explosive propane tanks were removed from the front of the store, and traffic was rerouted from around the site.

At noon, the briefcase was blown up by the APD.

“It may have seemed like a lot to do over nothing, but you can never be too safe,” Curry said. “From what we could tell, there didn’t appear to be anything inside the case, but on the safe side, it was destroyed.”

There was a lot of trash talk going on at Monday’s commission meeting. There wasn’t any fussing and fighting. Instead,... read more