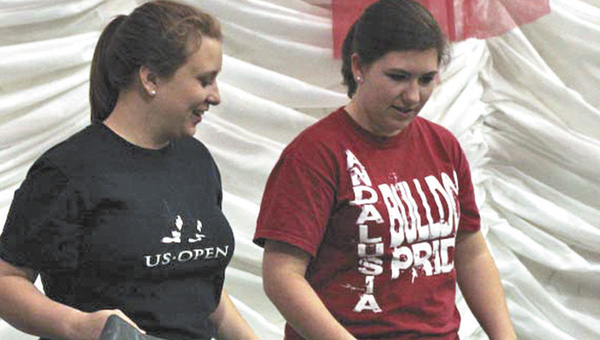 lex Hart and Catherine Grace Searcy wait for their next set of directions. | Courtesy photo

As soon as the school year begins, it becomes the night juniors and seniors long to experience – prom.

This week, Andalusia and Covington County schools will hold their junior/senior proms, and local law enforcement agencies are cautioning against drinking and driving.

“It’s supposed to be a special night,” said Sgt. Mike Hayden of the Andalusia Police Department. “It’s the first step to graduation if you’re a senior or the first step to being a senior if you’re a junior. It’s a rite of passage, but it’s also a waste if you spend the night getting drunk and putting everyone on the road at risk.”

Mothers Against Drunk Driving reports that in 2007, there were nearly 13,000 drunk driving fatalities and countless other injuries. Traffic crashes are the No. 1 killer of teens and 28 percent of fatal traffic crashes involving teen drivers are alcohol-related.

“When someone makes the decision to drink and then get behind the wheel, they then become responsible for everyone inside that vehicle,” Hayden said. “If an accident occurs, there are severe consequences.

“Take for instance, if you are driving the car and you’re drunk or had been drinking, lose control and hit someone – or heaven forbid someone dies – you’re responsible,” he said. “The same accountability goes if you strike another vehicle or property,” he said. “The consequences of drinking and driving can ruin your life.”

Hayden said prom goers should remember to call for help if needed.

“Even if you do make a poor choice during prom night and get intoxicated, if you need a ride, don’t be afraid to call your parents,” he said. “I can promise you, you might be in trouble the next day, but your parents would much rather you be alive and will be pleased that you called.

“Just remember, if you’ve been drinking, don’t get in that car and drive and don’t ride with someone who has been drinking,” he said.

Chris Gay, Zachary Williams, Ryan Williams and Dallas Ham are shown with the awards they won this past weekend. Kendra Bolling/Star-News... read more