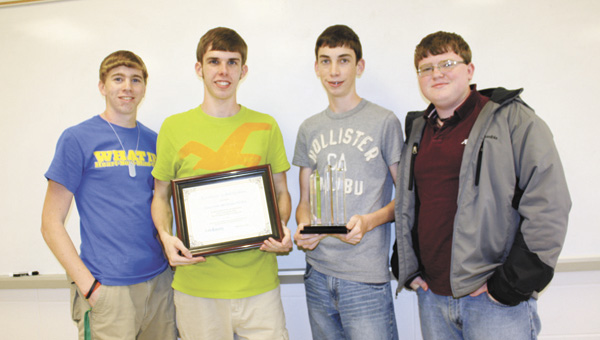 Chris Gay, Zachary Williams, Ryan Williams and Dallas Ham are shown with the awards they won this past weekend. Kendra Bolling/Star-News

A group of Straughn High School students were busy racking up awards last week in a series of competitions that took them from Montgomery to Orlando, Fla.

“We’ve been preparing for this since the beginning of the school year,” Zachary Williams said. “We wanted to go up there and do our best and take home the prize.”

And that’s exactly what the team did, winning an all-expense paid trip to the national LifeSmarts Competition in Los Angeles the last week in April.

The team answered questions about areas that matter to consumers in today’s marketplace, including personal finance, health and safety, the environment, technology and consumer rights and responsibilities.

“Really we answered questions about all aspects of daily life,” Williams said.

The team participated in four rounds of competition, including an all-team question and answer session, a “Family Feud” order round, lightning round and a challenge round.

“The challenge round is where we won most of our points,” Williams said.

Ham scored 100 percent on the questions he was asked.

The boys said they are excited about the opportunity to compete at the national level, but they have their work cut out for them.

After the LifeSmarts competition, the group immediately traveled to South Florida to the robotics competition.

The team said they learned a lot from other teams and felt that they took enough information away from the competition to help improve their next robot.

“We got there and a lot of the teams were very helpful,” Gay said. “One team helped us hook up our motor.”

The group said during the competition, they opted to play defense and had a good alliance.

“At one point we were ranked 10th out of 59 competitors,” Ham said. “We never got under 20th place in the first day of competition.”

The boys said they won the “Rookie Inspiration Award” because they were the team that motivated the judges the most.

“If they were interested in you, they’d come back and talk to you,” Williams said. “They liked us because we were the smallest team.”

Williams said all the competition was very helpful.

“They were there helping, and they wanted to see you compete, not sitting on the sideline,” he said.

Throughout the competitions the boys said they took away different things with them for the future.

“I think I took computer programming with me,” Williams said. “Everyone thinks I’m a geek or nerd, but I’m not. One guy from NASA told me that if you can understand how to program, you can have a job.”

Dallas Ham said he learned to be more mechanical.

“I learned more about how to build things and put things in the right places,” he said. “Before, I had no idea how.”

Adviser Sherri Williams said she’s “tickled” at the success of her team.

“I am glad they are getting these experiences,” she said. “At the competition, there was gracious professionalism in that people wanted to see you succeed. It wasn’t about who was going to win, it was about learning. I felt like it was a really different atmosphere.”