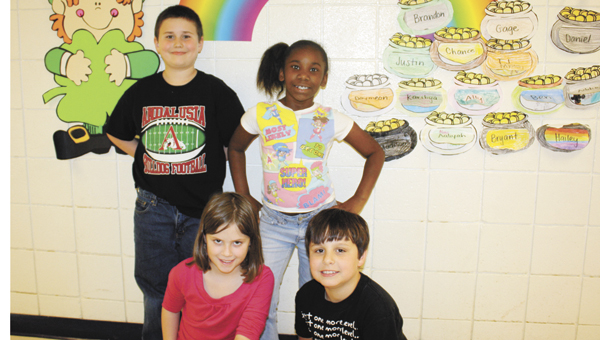 Forget to wear your green to today and you’ll probably get pinched, at least that’s how one of the St. Patrick’s Day traditions goes.

Every March 17, the Irish and others as well have a host of fun in honoring St. Patrick, who died in the fifth century, and was a missionary.

It’s a day the Irish have observed for more than 1,000 years and falls during the Chri-stian Lent.

The day is flooded with scenes of leprec-hauns, dancing, four-leaf clover and green ale.

But what exactly is a leprechaun and what do they do?

Anda-lusia Elementary School second graders had their own ideas about these little men.

“A leprechaun is a person in a green hat who puts gold at the end of a rainbow,” said Madison O’Conner. “But you don’t get to keep the gold if you find it.”

Daniel Gacha said a leprechaun is a small person who dances and makes you give back his gold.

“It’s the thing that lives at the end of the rainbow,” said Daymeon Theriot. “If you catch it and you make it laugh, it will give you his gold.”

The-riot said that a leprechaun typically naps and counts his gold during the day.

For Justin Morrisette, a leprechaun wears green pants, green shoes and has “little triangle ears sticking up,” and he hunts for gold.

“If you find the leprec-haun’s gold, you get to keep it and spend it,” he said.

Karibya Chambers had her own ideas about a leprechaun.

“He’s a person that puts the rainbow up,” she said. “If you want to steal the rainbow, you have to make him laugh. All he does all day long is make rainbows.”

Chambers said if you find a pot of gold, you get to keep it and spend it on Easter eggs to color.

“He puts a pot of gold at the end of the rainbow,” she said.

“I’d get to keep the pot of gold if I found it and you know what? I’d hide it somewhere in my room in case the leprechaun come back to get it.”

Bran-don Gurley said if he finds a pot of gold, he’d have to give it back so the leprechaun would know they had him.

As folklore has it, a leprechaun is a type of Irish fairy and looks like an old man wearing a red or green coat and enjoys mischief.

It has been said they spend all day long making shoes and storing their coins in a hidden pot of gold at the end of a rainbow.

If a human captures the Leprechaun it would grant three wishes in exchange for his release.