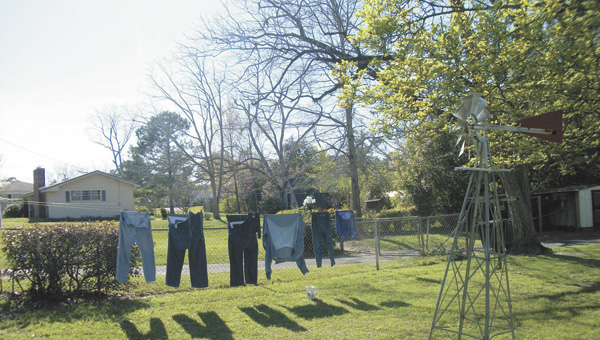 The day’s sunshine and the gentle breeze were a perfect combination to seal that freshly washed scent into line hung laundry, as shown here at the home of Ann and Doug Forrester in Green Acres. Unfortunately, it’s also a great recipe for allergies. | Stephanie Nelson/Star-News

The culprit? Pollen from trees, which can start pollinating anytime from January to April, depending on the climate and location. Trees that are known to cause severe allergies include oak, olive, elm, birch, ash, hickory, poplar, sycamore, maple, cypress and walnut.

“Pollens are tiny egg-shaped powdery grains released from flowering plants, which are carried by the wind or insects, and serve to cross-pollinate other plants of the same type for reproductive purposes,” said Dr. Angelo Agro, an Andalusia ENT. “When pollen is present in the air, it can land in a person’s eyes, nose, lungs and on their skin to set up an allergic reaction.

“In southeast, particularly in Alabama, we have been in the tree pollen season since January,” he said. “The big problem is, that in the winter time, we’re not as aware of pollen because of temperature.

“Just now, things are kicking in full force and when you add to that the grass pollen allergy season, which lasts from March to say November, you have trees hitting peak and grass waking up. The two of those combined make for a nasty allergy season.”

Symptoms may include allergic rhinitis, which is more commonly known as hay fever, allergic conjunctivitis or eye allergies and allergic asthma, he said.

Pollens that are spread by the wind are usually the main cause of seasonal allergies, while pollens that rely on insects such as the honeybee to be carried to other plants do not.

Most plants with bright, vibrant flowers such as roses are insect pollinated and do not generally cause seasonal allergies since the pollen is not usually present in the air.

Pollen can travel long distances and the levels in the air can vary from day to day. At present, Covington County is experiencing a high pollen count, according to PollenCast, a pollen-measuring tool.

It can also be quite different in various areas of a particular city or area.

Levels of pollen tend to be highest from early morning to mid-morning, from 5 a.m. to 10 a.m.

“Those big particles don’t do much damage,” he said. “It’s the stuff in the air that you breathe that’s the problem. They both occur at the same time, so it makes the yellow pollen a marker for the sneaky stuff.”

Agro said the best way to treat seasonal allergies is to use antihistamines.

“They’re widely available over the counter,” he said. “And most recently, a number of the most effective and most desirable ones have gone OTC or generic.

“My advice is to go with the least expensive generic. If it works you’re home free,” he said.

The Andalusia City School Board this week approved a school start date of Aug. 8, 2011. The calendar includes a... read more