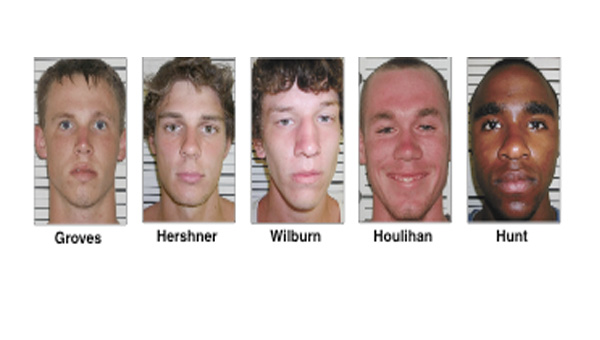 A Thursday trip through Covington County didn’t end on a friendly note for five spring breakers after they were arrested for allegedly stealing the “Friendship Road” sign.

Chief Deputy David Anderson of the Covington County Sheriff’s Office said the men – who ranged in age from 19 and 20 – were observed standing in the middle of the Friendship Road and U.S. Hwy. 331 intersection north of Opp.

“Dispatchers at 911 received a call at approximately 3:35 p.m. from a concerned citizen who reported seeing several individuals in the roadway causing a traffic hazard,” Anderson said. “As he left the area, he noticed some of the individuals taking the ‘Friendship Road’ road sign off of the top of the stop sign.”

Anderson said the citizen was able to a description of the individuals and a tag number of the vehicle.

Anderson said Crenshaw County deputies stopped the vehicle in the vicinity of Brantley.

He said Covington County engineer Darren Capps was notified and advised that he would press charges for the theft.

The men were detained and transported to the county jail where they were charged with one count of third-degree theft of property and later released on a $3,000 bond.

There are several high profile cases scheduled on the upcoming trial docket, including the case against a father accused of... read more