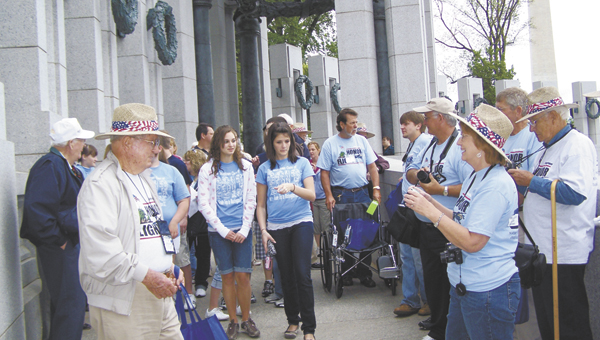 A local World War II veteran, Bronze Star and Purple Heart recipient and artist will be honored Thursday with a reception and art exhibit.

He is an award-winning painter who gets his inspiration from life on the farm. His father purchased property on Highway 84 in Sanford, a place where Brannon has spent most of his 90 years.

Brannon participated in the first Covington Region Honor Flight to Washington D.C. in May 2009, and the Honor Flight board is sponsoring the reception and exhibit.

“It came to our attention that Mr. Brannon was a very talented artist,” said CRHF president Tonitta Sauls. “We felt like it would be a good idea for our organization to promote the work of World War II artists because it would publicize their work and the Honor Flight.”

Brannon was encouraged to try oil painting when he decided to “slow down a bit,” and has won awards at the Covington County Fair for both oil and acrylic paintings.

The reception is also an opportune time to gather more information for those interested in the upcoming Honor Flight, which is open to all World War II and Korean veterans.

There are 145 seats available for veterans were deployed during these conflicts and have not previously participated, and applications are now being accepted.

The flight will depart Oct. 1, 2011, out of the South Alabama Regional Airport.

“We really want to make it a big deal,” Sauls said. “Last year, it was a historical event to fly that airplane from our airport. Although we had a good turnout for the sendoff and reception, we would like to triple or even quadruple that this year.

“We really people to put the Oct. 1 date on their calendars,” she said. “We selected the day because Auburn and Alabama will be playing away from home.”

Sauls said CRHF is the only hub in the area continuing its efforts to take veterans to Washington D.C. to see their memorials.

“Prattville and Wiregrass are not continuing theirs,” she said. “We are trying to keep our trips minimal for a number of reasons – the main one being money.”

Additionally, Sauls said they do need guardians to accompany the veterans on the trip.

Applications are due in August, she said.