Fixing up the grounds 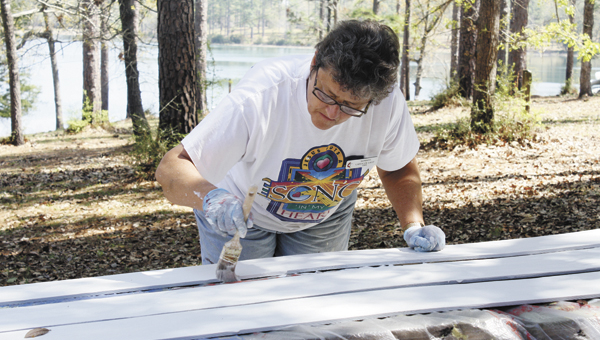 Caroline Gast primes replacement boards for the outside of one of the dorms on Tuesday. The Nomads will spend several weeks at the camp. | Kendra Bolling/ Star-News

They travel from here to there helping revive and recreate places through missions work, and one group of “Nomads” is working to help spruce up Blue Lake Methodist Camp.

The group of Nomads (Nomads on a Mission Active in Divine Service), provides volunteer labor and tools for all sorts of projects, which include new construction, remodeling, repairing and reconstruction at Methodist camps and other missions around the country.

Blue Lake Methodist Camp Director Phyllis Murray said work by Nomads is vital to the welfare of the facilities at the camp.

“It helps us so much,” she said. “They are working on various projects to help improve our site.”

For a total of three weeks, five couples, Ralph and Virginia Wiggers of Tennessee; Kitty and John Hahn of Illinois; Paula and Don Patrick of Michigan; Bill and Caroline Gast; and Shannon and Benny Neal of North Carolina, have been working to get a fresh new coat of paint on some of the rooms at the camp, repairing portions of buildings and repairing original pews in the more than 100-year-old chapel, among other things.

For some, this is their first rendezvous and for others it’s something they’ve done for nearly a decade and a half.

But the couple aren’t strangers to the mission field.

For the Hahns, being Nomads has been a way of life for them for the last 14 years.

“We got involved when building a new church years ago,” Kitty Hahn said. “There were a couple of Nomads and they invited us.”

Hahn said they have traveled to places such as California, Arizona, New Mexico, Alaska, Illinois, Montana and now Alabama.

The others have been involved in various Nomad projects for about two years each.

“We are members of the Methodist Church and we have an RV,” said Paula Patrick. “We had done Volunteer in Mission trips before.

“The best part about being a Nomad is feeling like you’ve made a difference,” she said.