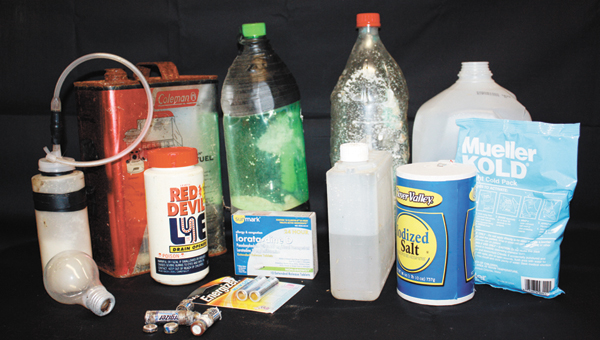 That was the statement Drug Task Force agents made after busting four meth labs and sending at least nine people to jail in Covington County in a week.

“For some reason, over the last several years, meth use has fluctuated,” said DTF agent Dave Harrell. “Now, I think this wave we’re seeing is those meth cooks that were sent to prison years ago are now getting out or getting off probation. We’re also seeing some new faces that have been caught up with that element of society, and it’s unfortunate.”

Harrell said with the new wave of “cooks,” agents are also seeing a new method of producing methamphetamine.

The new method requires no external heat source and reduces the cook time to 20-30 minutes, he said.

“What that means in simple terms of manufacturing meth is that instead of having to have a place with electricity, as well as the necessary chemicals, this new method allows cooks to do it anywhere – driving down the road, under a bridge, in a cooler – anywhere,” he said.

In the one pot method, cooks need a multitude of items such as pseudoephedrine, batteries, rock salt, containers, combustible fuel and an assortment of chemicals.

“They mix all those chemicals in together, and since the lithium in the batteries combusts when it reacts with moisture, it produces a chemical reaction,” Harrell said. “Then, they place it in the main cooling vessel, which is generally a 2 liter coke bottle.

“Once you get the reaction, then all you have to do is get another vessel like a squeeze bottle, use some sulfuric acid and rock salt to make hydrochloric acid. They call that ‘gassing the dope.’

“It’s that simple,” he said. “It can be accomplished in a small space, is extremely portable and can be stored in small containers.

“It’s also extremely dangerous all the way around,” he said.

“Think about it – it’s flammable fuels, caustic acids and explosive metals,” he said. “It’s a bomb waiting to go off.”

In recent weeks, agents have located the remnants of these one-pot cooks lying along roadways, and in one instance, in a local creek.

“Meth cooks have no regard for their safety or for anyone else,” Harrell said. “When they get through with these cooks, they pitch it out on the side of the road.”

Case in point – a melted cooler found along a county road, he said.

“We had a report of a suspicious cooler that a boy found on the side of the road,” he said. “It was all melted and was out of place. It was a portable meth lab that had exploded inside the cooler.”

Harrell said it’s his greatest fear that a child “will be inquisitive and open (a bottle) up.”

“To me, that’s horrifying,” he said. “It’s a real and present danger.”

If the general public finds a “one-pot’ cook, “leave it alone,” Harrell said.

“Call the DTF or your local law enforcement agency,” he said. “Pay attention to strange vehicles or traffic in the area, and call us.”

Those arrested in recent days and charged with manufacturing are facing a Class A felony, punishable by a minimum of 10 years up to life imprisonment.

District Attorney Walt Merrell said prosecution of these cases will continue “no matter what method is used to produced the meth.”

“The ‘one-pot’ method is just as illegal as the ‘red P(hosphorus)’ or any other method of cooking methamphetamine,” Merrell said. “We spent years dealing with the ‘red P’ method. We just about knocked it in the dirt, but just because the cooks have come up with a new way to cook it doesn’t mean we won’t continue with our efforts.

“Meth cooks may adapt their methods, but we will always be up to the task,” he said.