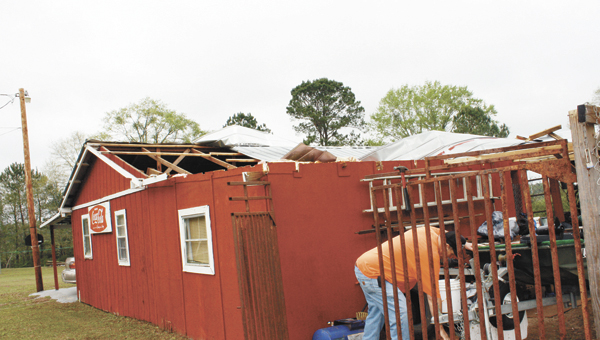 Horn Hill’s Dewanis Lunsford picks up pieces of his barn damaged by Sunday’s hail and windstorm that wrecked havoc throughout the county.

A Horn Hill community couple was among those in the county whose property was damaged during Sunday’s hail and windstorm.

Dewanis and Judy Lunsford lost the roof of their barn, a portion of their pump house and their aluminum boat was carried into the woods.

Judy was at work at Mizell Memorial Hospital when the storm hit, but Dewanis said he was home.

“I thought the house was going to go,” he said. “This (was) the worst I’ve seen since Opal. I called her and told her to stay where she was.”

Shortly before the storm, Dewanis said he and a friend had been out in the barn cleaning fish, but had finished up before it hit.

“I went and got in the closet,” he said. “But one of our neighbors said they saw a tornado touch down and come back up again.”

Dewanis said there was golf ball and tennis-ball sized hail found in the couple’s yard.

This is the second time the couple’s barn has been damaged by a storm.
“Everything inside of the barn is ruined,” he said. “We have a lot of electrical stuff and about a $1,000 mattress inside there, too.”

The Lunsfords weren’t sure if the barn was a total loss, and were waiting on an adjuster yesterday.

Despite the losses, the couple said they are thankful that no one was hurt.

“I’m so thankful he didn’t get hurt,” Judy said. “It’s true when they say that possessions can be replaced, but you can’t replace a life.”

NFL star on offense against ALS