NFL star on offense against ALS 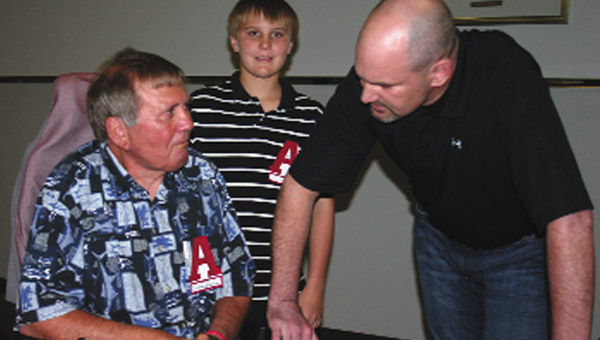 Jimmy Blanton, who has ALS, and his grandson Lane Prevett, with Kevin Turner.

Former University of Alabama and NFL running back Kevin Turner told a crowd of about 50 in Andalusia Saturday night that his former successes as an athlete give him a platform to raise awareness and funds for the fight to find treatments and a cure for ALS.

Turner was diagnosed with ALS, also known as Lou Gehrig’s disease, last spring.
“I realized I have a small platform because of the NFL,” he told a crowd organized by the local UA Alumni Association chapter and much more interested in his college career. “It took off and it’s gone farther than I thought it would go. Whoever will sit down and either take a picture or write a story or shoot some video, I’ll talk with them.”

“There are doctors and groups, who are working for a cure and treatment,” Turner said. “If someone found a way to stop the progression, I’d sign up in a heartbeat.”
Turner’s first symptom was that his fingers didn’t respond well when he was playing the guitar. Then a friend noticed that one of his shoulders was smaller than the other.

A neurologist told him a disk in his neck was impeding a nerve.

“Just like every other surgery I’ve ever had, I expected everything to be OK,” he said.

Two months later, his arm wasn’t better and his other arm was beginning to give him trouble. He endured six weeks of tests.

“I’d been poked and prodded and the doctor wanted to do one more test, one I’d already had once,” he recalled. “I said, ‘OK, I’m not walking out with nothing. What are you thinking in your gut?’ ”

The answer was shocking.

“Well, my gut’s saying I think you have ALS,” his doctor said. In the discussion, he was reassured that he could live for 10 to 12 years.

Unfortunately, there’s not a single test with which to diagnose ALS. Many more tests and a muscle biopsy later, the doctor’s gut instinct was confirmed.

The test results were delivered by phone, by a doctor who said he was 95 percent sure Turner had the disease and gave him a life expectancy of 5 to 6 years.

Later, he consulted a third doctor, who told him he had a 2 to 3 year life expectancy.

“I decided not to get any more opinions,” he quipped. “I was afraid I might not make it out of the appointment alive.”

Turner said he kept thinking, ‘There’s got to be a way to fix this.’
But at present, there is only one drug on the market, and it only slows the progression.

“A doctor told me it’s been shown to extend the lives of ALS patients by three months,” he said, adding that the drug costs $1,500 to $2,000 per month.
“I told him, ‘Unless you can guarantee that those three months will be on a tropical island with whomever I want, I’ll pass on that,’ ” he said. “I probably should have taken it, but I was ignorant of the disease at the time.”

Turner said he was at first in denial about his disease.

“But I was reminded every morning when I was trying to get dressed or brush my teeth or shave,” he said. “This is a crazy disease. It starts, and it is progressive and random.”

The former NFL fullback now uses both hands for the simple task of drinking from a cup. Still he said he feels very blessed.

“I’m still able to drive,” he said. “I’m fortunate enough to be able to talk, although some people wish I didn’t. I want to find a way to help doctors make progress.
While some research indicates there is a familial gene linked to ALS, other research finds links to head trauma. Turner talked to a research exploring that.

“I said, ‘Doc. How are you gonna teach rats to play football?’”

Turner described himself as a Christian who had been on the “inactive list.”
“I got moved up to active,” he said of his faith. “It’s the way I get through every day.”

Contributions to The Kevin Turner Foundation may be made online at kevinturnerfoundation.org.