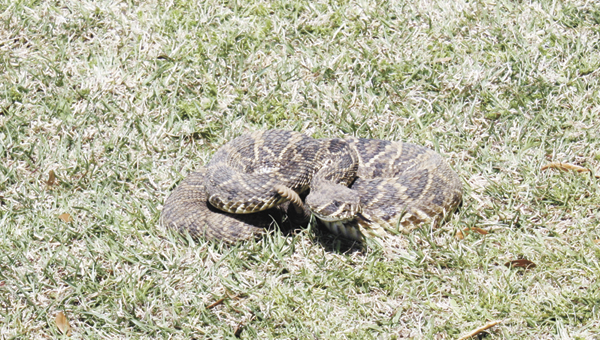 Rattlesnakes are easily camoflauged even in the green grass. Anyone working or playing outside should exercise caution. | File photo

An 11-year-old Pleasant Home boy was bitten by what appeared to be a rattlesnake Wednesday afternoon.

The boy, who was not identified, was playing in the yard at approximately 4 p.m. when the snake struck.

Family members immediately called 911. Advanced EMS transported the boy to Andalusia Regional Hospital, where he was treated for the snakebite.

Information as to the boy’s recovery status or the type of rattlesnake involved was not immediately available.

Mark Bailey, conservation biologist with Conservation Southeast Inc., said as this is the beginning of peak snake movement activity in south Alabama.

“It typically runs from March to November, and here we are right at the end of March,” Bailey said. “While it’s been a little cooler these last couple of days than before, that doesn’t mean the snakes aren’t moving. We should all remember to keep our eyes open when outside – especially in tall grass where you can’t see – because it’s so easy to put a hand or foot in the wrong spot and invade a snake’s space.

“Just remember that nature and the great outdoors is not an overly dangerous place, you should just be cautious,” he said.

A recent rash of car burglaries in the Andalusia Country Club area is prompting the Andalusia Police Department to urge... read more