In the middle of things 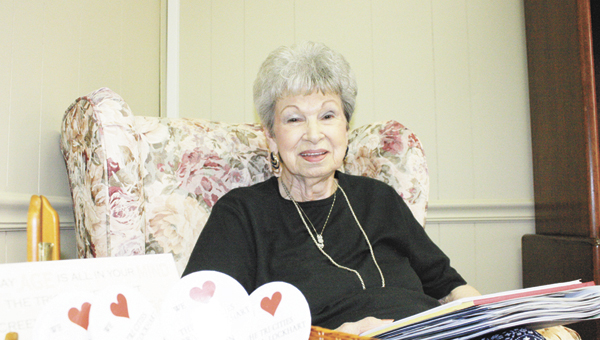 Florala’s Lucille Cox is retired after 68 years of service, the majority of which contributed to the city’s success. | Stephanie Nelson/Star-News

After more than 65 years of being “on the job” – 40 of which were spent “trying to bring something to Florala” – Lucille Cox is retired.

The Tri-Cities Chamber of Commerce director is giving up the post she’s held three times since 1992 and most recently from 2001. Thursday was her last day. “I have absolutely loved my time here, and I’m going to miss it,” Cox said. “But I’ve worked for 68 years, and that’s long enough. I’ve loved every job I’ve ever had. I loved the people, the interaction and everything that goes with working with the public.

Since 1950 there hasn’t been much that’s happened in Florala that Cox hasn’t known about.

She served as city clerk for two different mayors, worked for the city’s water board and seen the dissolution of a partnership between the two entities not once, but twice.

So, it’s safe to say she knows all about the intricacies of small town politics.

“When I first started, we did everything by hand, including the water bills, and I did it for $65 a week,” Cox said. “It was a great day when we got a typewriter.”

It was because of that typewriter that she received her first – and only – termination from a job when she got fired from her position as city clerk. Why, one might ask? Small town politics, of course, she said.

“Herman Leary was mayor then, and there was a huge wet/dry referendum in the county,” she said. “Herman wanted the county to go wet. He’d asked me to get all the tax totals from alcohol sales paid to the city by the ABC Board since its conception, which I think was 1936 or ’37. Back then we used to have to use carbon paper to make copies.

“Well, I knew that the First Baptist Church preacher was a staunch supporter of it being a dry county, and I knew he’d come and ask for a copy of it,” she said. “So, I made a two copies, and when he came in and asked for it, I gave it to him.

“Well, that was the wrong thing to do,” she said. “Herman fired me, even though it was public information.”

By then, Cox said she’d had enough of city politics and went to work for James Prestwood, an Andalusia attorney, for whom she worked in the Florala office for the next 18 years.

In 1989, following the death of her husband Royce “Rip” Cox, she decided she was ready to get her hands back into city dealings. It wasn’t long before a partnership was formed between Cox, Pearl Tyner and Myra Webb, with the help of Sybil Mason, to rehabilitate the old L&N Depot. That partnership led to the creation of the Florala Historical Society.

Once the rehabilitation of the now Pearl Tyner Station was finished, Cox turned her attention to the Chamber of Commerce.

“The thing about community service is that it’s ongoing,” Cox said. “I’m not going to quit completely, but I’m going to take some ‘me-time.’ I’m going to visit my grandchildren in Prattville, enjoy my bridge club and make sure I’m at choir practice at First Baptist Church.”

It is unknown who will take the chamber’s helm after Cox’s retirement.

He’s the young guy of the Rodeo