Brooks: It’s in his blood 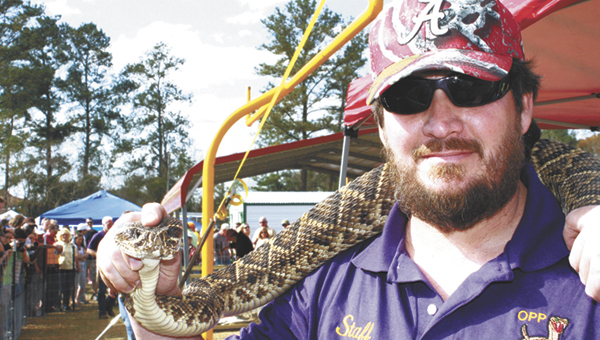 Chuck Brooks has been handling snakes since 1984 for the Rodeo.

Snake handling runs in his blood.

“I just evolved into it,” said Chuck Brooks, a snake handler for the Rattlesnake Rodeo. “My cousins were part of the original rodeo.”

Brooks joined the Jaycees, the organization that first held the Rodeo, in 1984 and was a younger snake handler, and said he joined because of the scholarships.

Brooks said he learned to handle snakes from “watching and handling the snakes.”

“I started when I was around 8 or 10,” he said. “But I wouldn’t recommend kids these days doing it.”

Brooks said he’s worked in zoos near the Gulf Coast, where he’s handled an assortment of snakes, not just rattlesnakes.

“I’ve worked with zoos that had black mambas and cobras and other poisonous snakes,” he said.

Brooks said he enjoys working with the rodeo because of all the different people he gets to meet.

“We meet a lot of interesting people,” he said. “We have people who come from Canada and a group that comes from England. We also have a lot of ‘Snowbirds’ who would stop at the rodeo. Many of them plan their trips back home so they can see the rodeo.”

Brooks said people from as far away as Australia and Germany have attended the past rodeos.

In years past, Brooks said the Jaycees were the largest donator to St. Jude’s, when country music star Sawyer Brown was in concert.

“That made me proud to be part of the community,” he said.

What keeps Brooks coming back yearly?