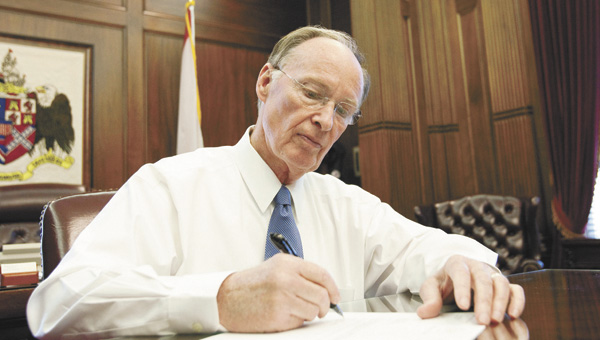 Many area residents who depend upon services from the South Central Alabama Mental Heath Board could be left wanting, and the state’s court system will be more chaotic.

Not all of the local effects of Gov. Robert Bentley’s Thursday declaration of 15 percent proration in the state’s General Fund budget are known, but this much is certain: Local jobs will be lost.

Bentley was forced to declare proration because the state is facing more than a $100 million shortfall in the General Fund budget.

The state Constitution prohibits deficit spending. So when the state’s revenue falls below appropriations, the governor must declare across-the-board cuts, or proration. The current declaration will remain in effect to the end of this fiscal year on September 30.

Four state agencies — Medicaid, Pardons and Paroles, Department of Corrections and the Ethics Commission — are exempt from the proration, after the legislature this week approved supplemental funding to keep them “whole.”

Diane Baugher, executive director of the South Central Alabama Mental Health Board, said her office currently has 175 employees on the payroll – an expense that makes up 80 percent of the office’s total budget. The office serves residents in Butler, Coffee, Covington and Crenshaw counties.

“Any sizable cut will result in loss of jobs and loss of services to the mentally ill, substance abusers and the intellectually disabled,” Bauer said.

She said if the 2012 budget is reduced an additional 25 percent reduction as expected, “for mental health that could mean 65 jobs would be lost locally and 2,000 people discharged (from treatment). Something that could set the public mental health system in Alabama back at least 10 years.”

Bauer said mental health officials are scheduled to meet legislators next week in Montgomery to discuss the budget.

District Attorney Walt Merrell said his office will not experience any layoffs in the current fiscal year.

“Proration is certainly not good,” Merrell said. “What most people don’t realize, 35 or 36 percent of our budget comes from the state. That 15 percent will hurt, but it will not require any lay-offs, and luckily, we don’t anticipate cutting services of any kind.”

Merrell said the 2012 fiscal year budget could bring an additional 20-25 percent reduction, which will bring more changes to the way his office operates.

“If you take that 15 percent this year, combine it with whatever we get next year, add to that thousands of inmates about to be released, and I suspect that this time next year, our criminal justice system will be in chaos,” he said.

The state finance director announced Wednesday that if the legislature adopts the general fund budget proposed by Gov. Bentley, 3,000 Alabama prison inmates convicted of non-violent crimes will have to be released. At present, 20 bills supported by Chief Justice Sue Bell Cobb are being discussed that are aimed at reforming the state’s sentencing procedures and reducing the number of prison inmates.

If that happens, Merrell said his office will be grossly under-funded and overrun with new cases after the prison “floodgates” are opened, since those who are about to get early release – non-violent offenders jailed for burglaries, drugs, etc. – tend to be repeat offenders who in many ways tax the system more than violent offenders.

“And it’s simply because our government, for whatever reason, refuses to build more prisons,” he said.

“I hope the general public is paying attention,” he said. “If they’re not, they’re going to wake up in a month or two and realize that life as we know it just changed dramatically.”

Courts also will be affected. The current proration means a $4 million cut in the state’s Unified Justice System expenditures, and state court officials are proposing to eliminate 150 jobs statewide – some of which will be in Covington County. Presiding Circuit Judge Ashley McCathan was in a meeting Friday afternoon and not available for comment.

Ziba Anderson, director of the Covington County Health Department, and officials at the Andalusia office of Children’s Rehabilitative Services, each said it’s too early to tell how their offices will be affected.