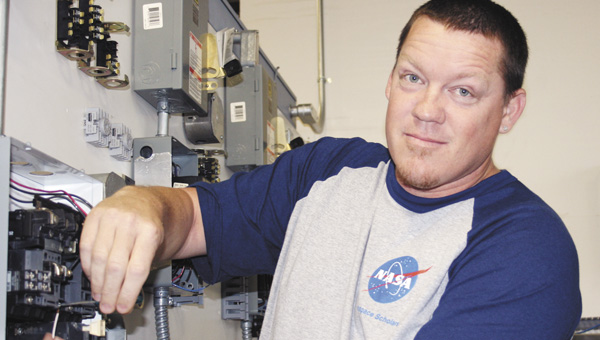 Aaron Nelson of Opp will participate as one of 79 in an national aerospace program soon.

Aaron Nelson of Opp has his eyes on the sky and beyond to the planet Mars, and is looking forward to being part of an exploration team project directed by engineers with the National Aeronautics and Space Administration (NASA).

He is one of 80 students nationwide and four from Alabama selected to participate in the National Community College Aerospace Scholars program, including an upcoming trip to the Jet Propulsion Laboratory in Pasadena, Calif.

“I’ve always been interested in space and flight,” said the 1991 Opp High School graduate, who will soon complete LBW Community College’s industrial electronics program. “I would like to pursue an engineering degree later and thought this would be a good opportunity for me.”

Nelson’s involvement with the NASA-based program started late last year with an application, followed by an online assignment in four parts to plan and design a robotics mission to Mars.

“I had to submit the entire concept from budget, timeline and construction of a robotic rover.”

His first reaction to the assignment was to research what had already been done, followed by developing new ideas for the rover.

“My first thought was to use ground penetrating radar on the rover, along with a deep boring drill to get samples from the subsurface. Since they found ice on Mars before, getting this type of sample would allow for better analysis of the planet.”

Exploring and obtaining information from other planets provides information about our solar system, and can help explain how Earth was created, he said.

Nelson said he learned a lot about NASA and engineering through the initial phase of the program, such as the amount of time and work it takes to get a spacecraft off the ground and to another planet.

“A lot of work NASA does can also benefit our daily lives. Things they use in space travel have applications for the general public, such as plastics and polymers.”

The second phase of the program includes an expense-paid, onsite experience at NASA where he will work on a team project. He will also attend engineer, scientist, and astronaut briefings, and tour the Jet Propulsion Laboratory.

“I hope to see the actual Mars rover that will launch later this year.”

Nelson, who moved to Opp at the age of 7, decided to pursue higher education 19 years after high school to better himself and the lives of wife Alicia; son Alex, 17; and daughters Krystal, 15, and Danielle, 3.

He has maintained a 4.0 grade point average since he started at LBWCC last year, earning a position on the president’s list each semester and becoming involved in Phi Theta Kappa, a national honors society. He will soon earn an associate in applied science degree in industrial electronics, and would like to return to LBWCC to pursue a degree in computer science.

As Nelson prepares for his trip to California, where he’ll spend three days filled with space-related activities, he said he is most grateful for the support of his family.

“My wife is thrilled for me. She’s been behind me the whole way.”