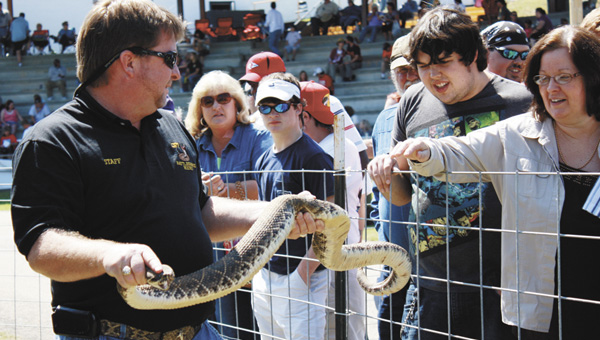 Mayor H.D. Edgar said that number is preliminary, and the actual totals will be available later this week once final numbers are received from its online ticket seller.

“It was a huge success,” he said. “The weather was beautiful and a lot of people turned out.”

Earlier last week, the weather forecast was “iffy” for the two-day festival, but the clouds rolled away as the crowds rolled in.

Edgar said he anticipated a large crowd for the annual event.

“I had anticipated that many people being there, if the weather was good,” he said. “The stadium can’t really hold a lot more people than that. As always, it’s a great way to draw the crowds to Opp.”

“We had excellent entertainment,” he said. “Everyone seemed to really enjoy themselves.”

In addition to “toe-tapping” entertainment, participants had the opportunity to make their way around Channel-Lee Stadium for treats including roasted sweet corn, chicken, lamb, Greek food, fish, fried snickers and fried alligator.

For those brave enough to try it, the Opp Trailmasters cooked up plenty of snake meat.

There were a large assortment of vendors from which to take home souvenirs including T-shirts, handmade musical instruments, portrait drawings, handmade soaps and lotions and veterinary merchandise.

No rodeo would be complete with the main attraction – the rattlesnake and snake races.

Snake handlers showed off the estimated 40 snakes collected from throughout the county, while providing safety information to those in attendance.