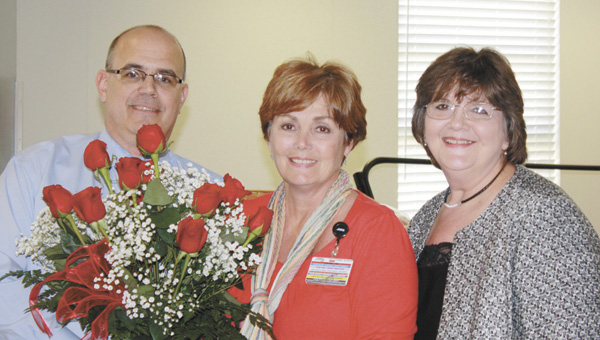 Miller was recognized Thursday by fellow staff and family with a reception at the hospital.

Each year, the hospital recognizes one employee who best exemplifies “the spirit and value upon which our company was founded,” said ARH CEO Mark Dooley. The award is named after the company’s founding chairman and CEO.

Dooley said winners are those who consistently go beyond the call of duty in serving patients and the community, who demonstrate a level of commitment and caring that transcends every day, who respects others in everything they do and who inspire others with compassion, dedication and a merciful spirit.

Miller was nominated for the honor by Patty Ashworth and Bobbie Meyer.

Each described how Miller dedicates her time during the Christmas season to help adults at Montezuma Academy, as well as volunteering during other holiday seasons.

“Each Christmas, (Miller) helps plan the Christmas party through the Civitan Club for the adults at the Montezuma program,” Ashworth wrote. “She is kind and gracious to those people. During the rest of the year, she is an active volunteer with Beyond Measure. Beyond Measure began as a meal program for shut-ins during the holidays – mostly Thanksgiving and Christmas. It has expanded to Easter and July 4.

“(She) meets no strangers,” Ashworth wrote. “She will stop and talk to anyone to lift them up. She truly goes above and beyond to show compassion and care to all those whose paths she crosses.”

“(Miller’s) selfless acts come from her heart,” Meyer wrote. “She does not seek recognition or the limelight. In fact, I am sure that many people don’t know about her involvement to help those less fortunate.

“And no matter if she is having a bad day or battling her own hard times, she will smile, press on, persevere and continue to help those who are in need,” Meyer wrote. “I am consistently inspired by her compassion, dedication and merciful spirit.”

Scale Back weigh-in next week

Those participating in Scale Back Alabama at Andalusia Regional Hospital will have the opportunity to “weigh out” Mon., April 11... read more