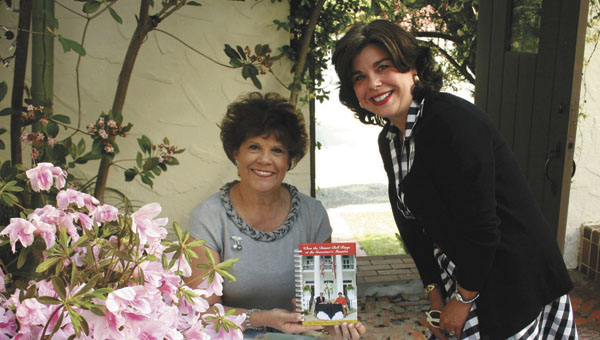 Former Alabama First Lady Patsy Riley said it was comments made at the funeral of former First Lady Martha Brewer that inspired her to publish her latest book, “Alabama’s First Ladies and Their Governors.”

Mrs. Riley – who was chauffeured to Andalusia by her husband, former Gov. Bob Riley – autographed copies of that book and “When the Dinner Bell Rings at the Governor’s Mansion” as a fundraiser for the Andalusia High School Literacy Club.

She said at the funeral, she heard “many wonderful things Mrs. Brewer had done as first lady.”

“Outside of her family and close friends, no one knew what a contribution she had made,” Mrs. Riley said. “I was driving back to Montgomery and I decided to write the book.”

Mrs. Riley said she combed through “wretched boxes” of news clippings housed in the state archives for her research, which includes each of the first ladies who have lived in the governor’s mansion, beginning in the 1950s.

“Every first lady made sacrifices, too,” Mrs. Riley said. “It’s time for our first ladies to shine.”

All of the proceeds from her books go to the fund to preserve both the governor’s mansion and the companion mansion next door. The structures were completed within three years of each other, and were built for sisters.

Mrs. Riley oversaw the purchase and restoration of the home.

“Don’t believe them when they say you can’t do it,” she said of historic preservation efforts. “People care about our history.

“It can’t be just the city council and the mayor,” she said. “Everyone has to be involved.”

Asked about his duties for the day, the former governor said being a driver’s not too much fun.

“I did everything wrong,” he quipped. “Didn’t turn at the right place, should have come down I-65 instead of 331. My staff didn’t speak to me that way.”

Have lunch on the Square today