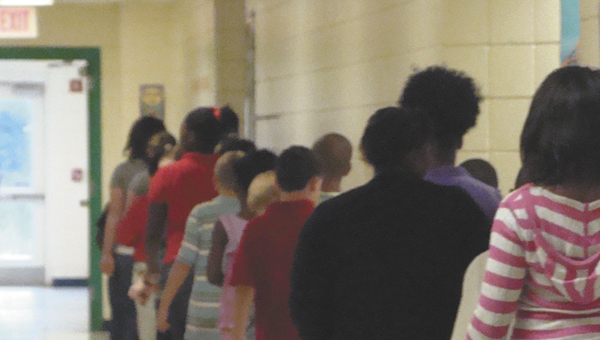 Larger class sizes are on the horizon come next school year. | File photo

Local school superintendents feel confident about the numbers included in the state education budget passed by a legislative panel Wednesday.

To accomplish that, it would mean cutting the number of state-funded teachers by 1,125 and increasing the student-teacher ratio in classrooms statewide by an average of 0.45 students per teacher.

The Ways and Means-Education Committee of the state House of Representatives voted 10-5 for the revised budget, which the full 104-member House is expected to debate Tuesday.

State school Superintendent Joe Morton said that roughly 1,500 to 1,800 teachers retire each year, so the proposed reduction in state-funded teachers could be met simply by not replacing many retirees.

Morton said most “other current expenses” or OCE money is spent by schools to pay utility bills and to pay support workers. He said adding $82 million to OCE would save the jobs of about 2,000 support workers such as secretaries and janitors.

Both Morton and Bentley have endorsed the revised budget.

“I think (the budget is) probably pretty good considering the circumstances,” said Opp Superintendent Michael Smithart. “Changing the divisors is never good, because it leads to increased class sizes, but we had to have more dollars in OCE and transportation. This budget accomplishes that.”

“These numbers give us a little bit of hope,” Watson said. “Before all the systems in the state were in a bind. It really helps that the governor found some money here and there.

“But, really, we’re going to have to wait to see what is sent down dollar-wise from Montgomery before we truly know what we’re facing locally,” he said.

“I did see were there is more OCE money, which is great,” Holley said. “Any help we can get is appreciated.”

The revised budget would not cut the number of workdays in the school year, but it does count on teachers and other public school employees to pay an extra 1.5 percent of their salaries for retirement coverage next year.

The budget proposes for the 2012 budget year, which starts Oct. 1, to spend $5.58 billion from the Education Trust Fund, the main source of state money for public schools and colleges – a figure that is $92.3 million more than Bentley proposed spending. Rep. Jay Love, R-Montgomery, has said $40 million of the extra money would come from closing corporate tax loopholes, and shifting revenue from other sources would take care of the rest.