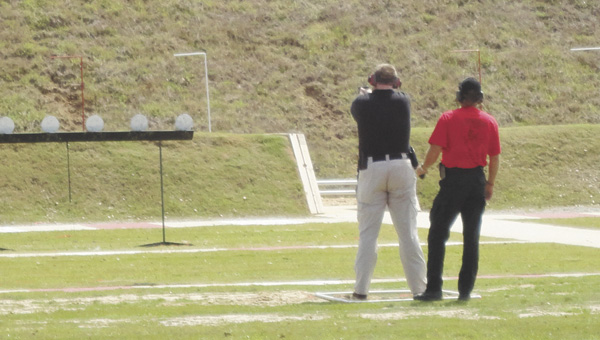 Some 48 officers from Alabama law enforcement agencies and the Florida Panhandle participated Friday in the fourth annual pistol competition.

Sponsored by the county’s Incident Response Team, the event was held at the Andalusia Police Department training facility.

Competition participants were required to complete three courses of fire.

The winner was Robbie Barton of the Alabama Beverage Control Board.

“As a result of his superior shooting skills, he was designated as the event’s ‘Top Gun,’” said IRT Commander Mike McDonald.

Competition gold sponsors squared off at the firing line in the sponsor’s event in which Jack Vickert won.

District Attorney Walt Merrell welcomed the participants and thanked them for their service.

Using money raised through the competition, the IRT made a donation to the Montgomery Police corporal badly injured in a motorcycle accident, while escorting a funeral possession.

Additionally, the team made a donation to a family, which has major medical expenses.

“The IRT team would like to thank each and every one of our sponsors that made this event a success,” McDonald said. “We would also like to thank Chief Wilbur Williams and the Andalusia Police Department for their logistical support and the utilization of the training center’s range.”

Deal or no deal, taxes due April 18

The good news is that late last night, members of Congress brokered a short-term budget deal to prevent a government... read more