McIntire to relocate business to Andalusia 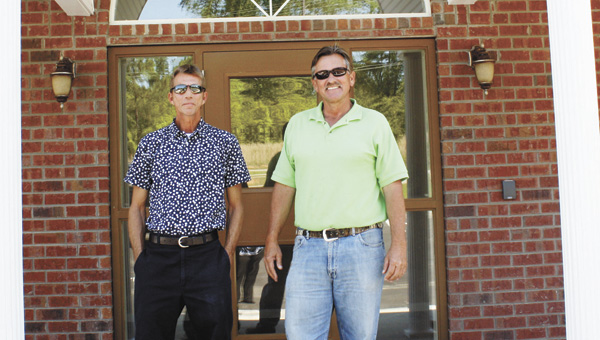 Mark McIntire and Mark Aldrich are shown in front of the new forestry building. | Kendra Bolling/Star-News

After nearly 50 years in business in Conecuh County, Edwin McIntire Inc. is moving its businesses to Andalusia.

Owner Mark McIntire, who has be instrumental in building the new United States Forestry building on the Hwy. 55 bypass, as well as partnering with Olin Hardin and Dr. Tim Day to help bring Gamma Health Care to Andalusia, said he’s lived in Covington County for 35 years and is ready to bring his businesses home.

McIntire has his hands in more than $2 million in infrastructure with these two projects alone, he said.

“We’re moving because of the leadership here,” he said. “Mayor Earl Johnson has been instrumental in helping me in Andalusia with two projects. He has a business attitude.”

McIntire will bring with him 14 employees to add to the county’s workforce with the possibility of more, he said. He’s moving his air conditioning and refrigeration business, contracting crew and his commercial real estate offices to the former Greathouse Floors building on Hwy. 29.

His newest project, the new forestry building, will allow the USDA to relocate U.S. Forestry offices from U.S. 29 South to the Hwy. 55 bypass.

“They needed additional office space,” he said. “And we already had this lot beside the Social Security office. We contracted with them to do a 4,600 square-foot of office space that will accommodate 18 people. It also includes a kitchen, conference center and ranger office.”

McIntire said the department will be able to move in May.

“This project went relatively quickly,” he said. “We began Nov. 23 and finished March 23.

“Moving our business here is a good opportunity,” he said.

Demolition of the building located between the Andalusia City Hall and Springdale is under way this week. Andy Wiggins, director... read more