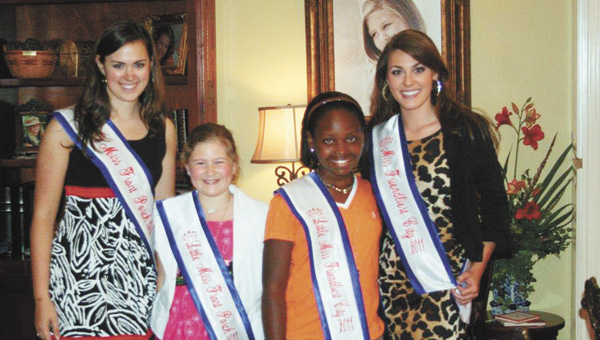 Teachers of Opp’s Ariyon Hightower and Merrill Ann Culverhouse always knew the two were “rising stars,” but now they have the title to prove it.

OMS counselor Mar-garet Fox, who is a certified Miss Alabama judge and co-director of the joint pageant, said the Miss Rising Star program is a mentoring program for the younger girls.

“The Miss Rising Stars accompany their Misses in June to the Miss Alabama pageant for the pageant week,” she said. “The girls participate in all sorts of activities, including a fashion show, and they are featured in the pageant program book. It’s a big deal for the little girls.”

Fox said the girls have been making appearances at local events such as the Running for Academic Excellence 5K held in Brantley on Saturday.

“The girls handed out the awards,” she said. “They also attended a garden club event at Helispec where they signed autographs.

“The older girls came on Friday afternoon, and we all went to Haven’s Place in Luverne,” Fox said. “Haven’s donated two dresses, and we went to supper.”

Fox said the girls had the opportunity to travel to Samford University for a “pajama-rama,” where they had to design slippers that represented the town they were representing.

“Rebecca and Merrill Ann’s had front porches on them,” she said. “Ariyon and Kendra’s had peanuts on them.”

“We decided to make a front porch bedroom slipper,” Culverhouse said. “Since Brantley is known for their beautiful front porches, we thought it would be a good idea, so we made it entirely out of popsicle sticks.”

Culverhouse said the ‘pajama-rama’ was for all the Miss Rising Stars in the state, but only five of them came.

“We also had a fashion show and pancakes,” she said. “My big sister, Rebecca, is nice and sweet and she’s an Auburn fan, and so is my dad, so they have been talking about the trees (Toomer’s Oaks). We’re having a lot of fun.”

Hightower said she’s “excited” about being a Miss Rising Star.

“We do a lot of things,” she said. “We did a ‘pajama-rama’ thing where we walked on the runway in our pajamas. We went to do the 5K.”

Hightower said she enjoys meeting new people through her journey.

“We’re getting to meet a lot of people,” she said. “The ‘pajama-rama’ and making a poster for Mrs. Fox that said ‘They’re not just fast, they’re foxy.”

As for the upcoming pageant week, Hightower said they’ll get to go out to eat with Miss Alabama.

Culverhouse said she’s really glad she’s a “Rising Star,” which just happens to be one of her birthday presents.

“It was my birthday, and my mom asked me if I wanted to have a party or a pageant,” she said. “I told her the pageant, because a party you may remember for five weeks, but this pageant, I can remember forever. I get to eat with Miss Alabama and have a gala with her and be on stage with Rebecca my big sister. I’m really having fun.”

McIntire to relocate business to Andalusia

Mark McIntire and Mark Aldrich are shown in front of the new forestry building. | Kendra Bolling/Star-News After nearly 50... read more