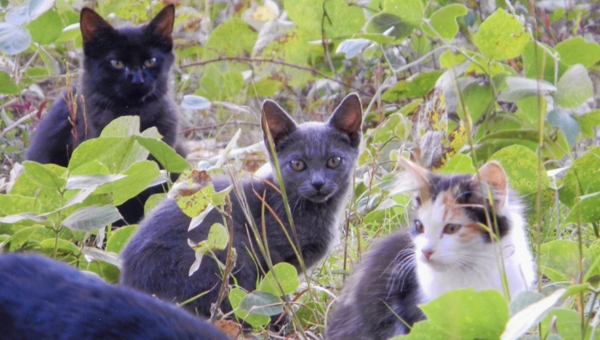 These feral cats belong to a local colony and were photographed behind a local fast food restaurant.

Volunteers who regularly feed Andalusia’s feral cat population say the sound of dry cat food being poured out for their consumption brings cats running from every direction.

These feral cats are often the victims of abandonment, accidental loss and failure by owners to fix their pets, according to the national Humane Society. They live in groups called colonies, often found near shopping areas or restaurants.

To help combat the ever-growing cat population in Andalusia, the Andalusia Area Humane Society is launching a capture, spay/neuter and return program and needs the community’s help in making it a success.

Lynn Bush, a Human Society volunteer, is coordinating a yard sale Saturday, where all the proceeds will go to help fund the program.

“Believe it or not, there are cat colonies in Andalusia,” Bush said. “Some are ‘homeless’ or strays and some are feral. Some were abandoned. Some were dropped off. And their numbers are growing because they’re not being spayed or neutered.”

Each colony is home to approximately 25 to 30 felines. Some animals have already been through the program and are easily recognizable by having one clipped ear.

“I know of at least five colonies here in town,” Bush said. “I have been feeding two colonies since October, but other local residents have been working to take care of other colonies for a number of years.”

Bush said the group has contracted with local veterinarians to spay or neuter the animals, test for feline AIDS and leukemia and administer rabies shots.

“But that takes money,” she said. “So, we need the help of the community. We need more funds. We have one individual – who wants to remain anonymous – who donates money each month, but we need more donors and individual donations. That’s why we’re going to be doing these fundraisers.”

Bush said items are needed for this weekend’s yard sale, which will be held from 7 a.m. until noon in conjunction with the Three Notch Emporium’s birthday bash.

“We’re asking that no adult clothing be donated,” Bush said. “If everyone who knew about this would contribute a few items, it would be plenty.”

Miranda Diel, a local animal advocate, is also assisting with the program.

“For us to provide this service, it’s very costly,” Diel said. “If we can come together as a community we can do more.

“These colonies tend to gather around restaurants because food is easily available,” she said. “But these colonies aren’t just in public places. Some people have the problem at their home.

“The simplest explanation is this – take someone who already has cats, but can’t afford to get them fixed. It doesn’t take a lot of time to get a large number of cats in one location,” she said. “By reducing the amount of colonies in town and checking for diseases, it will protect the community’s cats. A lot of people have free roaming cats that can get a disease like feline AIDS or leukemia from fighting or mating with another affected cat.

“So, really this program is a public service,” she said.

Diel said if colonies are maintained, the overall number will be reduced in time.

“I know that sounds crazy, but it’s true,” she said. “Some people say, well just take them all to the shelter and take care of it, problem solved. That’s not true.

“Other cats will just move into that space,” she said. “It’s called the vacuum effect. This is documented all across the country. So what we’re doing, it’s not a couple of crazy cat ladies coming together to do this.”

Healthy animals that have been rescued are available for adoption, Bush said.

For those wishing to make donations, make checks payable to the Humane Society’s feral cat program and mail to P.O. Box 1671, Andalusia AL 36420.

Also, if anyone is feeding a local colony of cats, contact Bush so that efforts can be coordinated throughout the community.

Only a few spots remain for local restaurants and organizations wishing to participate in the upcoming “Taste of Covington County.”... read more