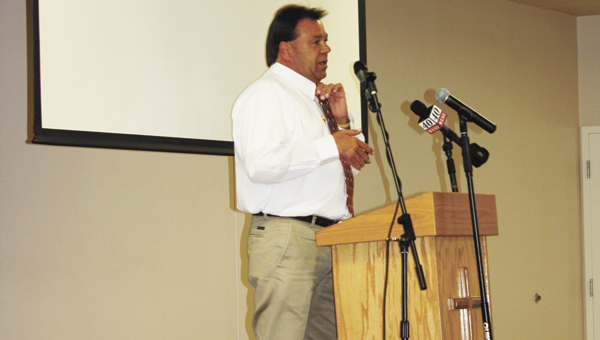 Bubba Campbell, a graduate of Crossover, gave his testimony at the banquet. | Kendra Bolling /Star-News

Before Bubba Campbell came to Crossover, he was on a path to destruction. Now he’s helping lead others down the right path with his own addiction ministry.

Approximately two years ago, Campbell entered the Crossover program after a long journey.

“Some call me a recovering addict,” he said at Thursday night’s banquet. “I call myself a Christian.”

Campbell said he had been married three times before he had an anniversary.

“To me, no one knew I was high because I was high all the time,” he said. “The last three years were the worst. I didn’t have a job. My main job was to supply the ingredients to make meth.”

Campbell’s mom found Crossover, and together they made the trek from Troy to Opp.

“I had no intentions on ever coming back,” he said.

However, Campbell was busted a short while later for purchasing pseudoephedrine in Enterprise. He was taken to the Coffee County jail, where he spent five weeks.

“I didn’t like it,” he said. “I went to the Thursday night prayer call. The preacher asked me if I was saved. I didn’t know what saved meant, but I turned my life over to the Lord. I knew I had to make a change.”

Campbell said he began reading the small Gideon-provided Bible while he was in jail.

“I’m from Goshen, and you can’t read that version well,” he joked. “I tried to read it, but I couldn’t understand.”

A little bit later, a pastor picked him up and took him to Crossover. When Campbell shared with him about the difficulties he was having understanding the Bible, the pastor told him the more he stayed in the word the more God would reveal to him.

“When I got to Crossover, they had the NIV version,” he said. “When I started reading it, I thought the Lord was was revealing a lot to me. To go from KJV to the NIV, you think the Lord has hit you with a two by four.”

While in Crossover, Campbell said the staff and ministers planted scriptures into him that he would need for the real world.

“I never understood until I got out into the world,” he said. “I went to Westview Baptist Church and sat on the front row every Sunday and every Wednesday. I was baptized there. I went to a men’s conference in Atlanta, and that’s where I realized that you can have fun being a Christian.”

When Campbell got out of Crossover, Ken Cox gave him his job back.

“That was the Lord working,” he said.

Now, Campbell has started a Bible study and addiction recovery ministry in Pike County, and said he’s had as many as 32 show up.

“And they’re there because they want help,” he said. “People come and they want help. I’ve helped 15 people get into rehab since I left.”

Campbell is working to open a halfway house in Troy.

“We’re a third of the way there,” he said. “We’ve been going around telling our story to local churches and hoping for support.”

Campbell said sometimes he second-guesses himself, but said the Lord always sends someone and they receive help.