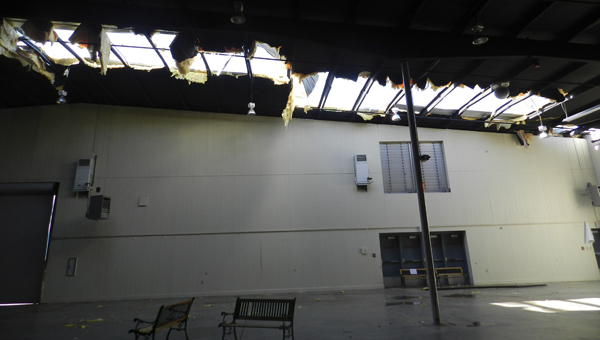 At first glance, it appears the storm that swept through Andalusia very early Saturday morning only removed part of the tin roof at the Kiwanis Community Center.

But facility manager Neal Dansby said closer inspection shows damage to the beams in the front part of the building.

Dansby, who was alerted of the damage at 2 a.m., pointed out a beam that is separated from the steel roof structure, and he and Harry Hinson both said that doors on the front side of the building are warped.

Close inspection shows that this beam is separated from the roof structure of the Kiwanis Center.

“Mainly, we’re just trying to get the building secure,” Dansby said about 8:30 a.m. “We’ll have an insurance adjuster here on Monday.”

The storm system that claimed the lives of at least seven Alabamians Friday and early Saturday moved through Covington County around midnight. Tornado sirens sounded at least three times, signaling that tornadic activity had been spotted on the radar.

Most of the damage reported was on the south bypass, where power crews were still working at 10 a.m. The storm felled huge pine trees and ripped several tin roofs.

Chris Griggs said he was asleep when the winds heightened. The top of a pine tree fell near his mobile home, damaging his vehicle and the roof.

“I just hope the landlord’s insurance will take care of it because it’s leaking pretty bad,” he said.

He said after the wind started, he heard whistling noises.