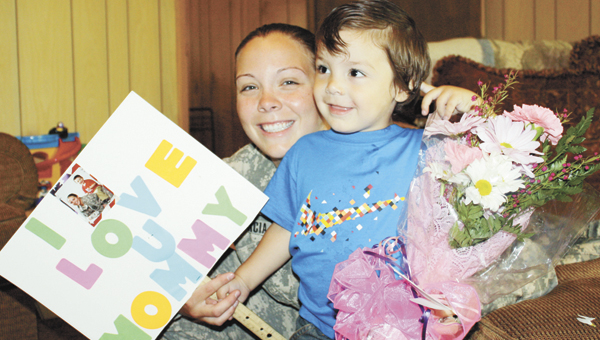 Two-year-old Aidan Garcia was excited to see his mommy, Brandie Garcia, who returned home to Opp for a 15-day leave Thursday. | Kendra Bolling/Star-News

Two-year-old Aidan Garcia got a late birthday present on Thursday. His mother, Brandie Garcia, returned home for a 15-day leave from Afghanistan.

Garcia, a 2005 Andalusia High School graduate, joined the Army in January 2007 as a medic.

Before then, she attended LBWCC, where she was studying to be a paramedic.

“I finished half of the program before I joined the Army as a combat medic,” she said.

She was named Solider of the Year before being deployed to Afghanistan.

In order to be named solider of the year, Garcia had to complete a series of objectives including an interview, essay and PT test.

“I like that part,” she said. “I felt confident. I was going to go for Fort Hood Solider of the Year, but I wanted to spend my block leave with Aidan before I left for Afghanistan.”

In March 2010, she received word that a brigade needed more medics to deploy.

She left for Kandahar Air Field in July 2010, when Aidan was only 15 months old.

When asked how she’s dealt with being away from Aidan for nine and a half months, she said it’s been “tough.”

“I try to stay busy to make the time go by fast,” she said. “The USO has a United through Reading program, where they have a camcorder set up, and I get to pick a book and I read it to him.”

When she’s done, the USO sends the book and the tape to Aidan, and he gets to see his mom read to him.

And Garcia’s mom, Brenda Smith, with whom Aidan has been living while she is in Afghanistan, takes pictures of Aidan watching it.

“It’s good for everyone,” Garcia said.

Smith said she has also shown Aidan pictures of his mother and talks to her on speakerphone when she calls home.

“It’s been enjoyable having Aidan here,” Smith said. “I wouldn’t trade it for nothing in this world except having her home.”

After Garcia’s leave, she will return to Afghanistan until the end of June.

“I will have two months left when I go back,” she said. “Our unit runs a level 2 hospital. We are in the 581st area support medical company. We also supply medics to the 372nd military police company. I did that for about four months. We take care of those guys. We help locals, Americans and contractors from throughout the world. If someone is sick, we help them. If we have questions, we call or email the doctors.”

After her return to the states, she plans to get out of the military by October, so she can spend more time with Aidan and finish school.

Officials at the county tax assessor’s office are making preparations to collect on about $108,000 in delinquent property taxes. Diane... read more