River Falls project ahead of plan

The original contract allowed 210 work days for completion. Days of inclement weather don’t county against the contractor, Ramsden explained. Work began on June 21, 2010, with an estimated completion date of Aug. 1, 2011. 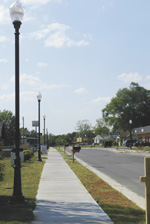 Ramsden said Wiregrass Construction Co., which won the $3 million bid, expects to be finished by the end of May.

“This could happen, but I’m guessing some time in early June,” Ramsden said. He said there is curb and gutter work yet to be done, and the final step will be the finishing layer of pavement from the bypass to Church Street.

The council also agreed to file the necessary papers to be a party of legal action the attorney general might bring against BP for tax revenue lost as a result of last year’s oil spill. The deadline to file is today.

• Met in closed session to discuss the potential sale of city-owned property.

• Approved an on- and off-premise beer and wine license for Sugar Rush.

• Announced openings on the South Central Alabama Mental Health board and the Planning Commission.