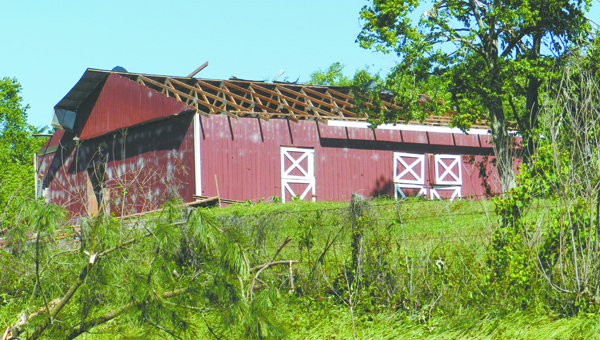 Jeff Garmin of the Mobile Weather Service said the tornado, which destroyed two homes and damaged 27 others, was an EF-1 on the Fujita scale when it hit locally Sat., April 16.

“The tornado caused higher damage amounts in Escambia County near Damascus,” Garmin said. “It was determined that (when it touched down there) it was an EF-2 tornado with winds up to 130 mph that destroyed three homes and did a significant amount of damage to seven others.

“It continued eastward following Brooklyn Road into the southern portion of Andalusia, where it lifted back into the sky at the (Kiwanis) fairgrounds.

Garmin said once the storm crossed the county line, winds had decreased to 110 mph where the maximum path width was an average of 100 to 200 yards.

Garmin said if the storm had moved northward, it would have placed the tornado through a heavier populated residential area of the city.

“That day, there was the danger of a potentially deadly tornado locally,” he said. “We did lose seven lives in Alabama, and while there was damage locally, it could have been a lot worse.”

Dove-award winning artist Jason Crabb will hit the Kiwanis Center stage Sat., May 7. The event is a “Heart to... read more