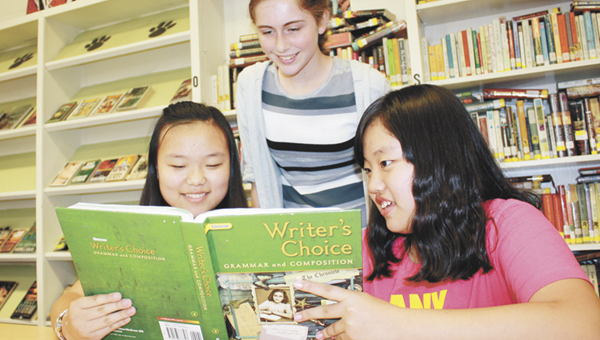 Yun Min Lee and Jiwon Choi, along with Susan Taylor, look at an English book inside the AMS library. | Stephanie Nelson/Star-News

For Korean transfer students Yun Min Lee and Jiwon Choi, it was the first English word they learned.

According to the two Andalusia Middle School students, it’s also a word that has served them well since moving to Covington County.

Both have fathers working at Hyundai supplier companies –Lee’s, at Guyoung Tech in Greenville; and Choi, at Sae Hae Sung.

Lee, a seventh grader, has spent the last four years in Andalusia. For the last two months, she, along with eighth-grader Susan Taylor, has been helping Choi learn the ins-and-outs of the English language.

“Here is cool,” said Choi when asked what she thought of Andalusia and AMS. Her grasp of the English language is coming along nicely, said AMS librarian Kay Fagerstrom.

Fagerstrom said when the girls first arrived, they used a computer to learn English. Now, Lee has progressed enough that she serves as a translator for Choi.

“When she first got here, we couldn’t get her to say a word,” Fagerstrom said of Lee. “Now, that’s all changed.”

Choi said she was “shy” because she didn’t understand the language.

“There were big words I couldn’t say,” she said. “Talking to people is still the hardest thing.”

Choi still requires the use of a translator to help her bridge the gap between Korean and English, but “I get it,” she said.

Both Lee and Choi agree that attending school at AMS is much better than attending a Korean school.

“In Korea, we learn to use the computer in kindergarten, and every desk has its own computer,” Lee said. “We don’t start learning English until the fifth grade, so that’s why I didn’t know a lot when I got here.

“In Korea at school, you don’t get a break. We go to school every other Saturday. We start at 7 in the morning, and when you are in high school, you have to stay until midnight,” she said. “Korean teachers are very scary. You have to do push ups, too.

“I don’t like that,” she said. “Here, school is easier. You don’t have to stay late. The people are nice, and English is easier than Korean.”

One of the first people Choi met was Taylor, who now works with her on conversational English.

Fagerstrom said the girls’ families are also encouraged to utilize the English-teaching computer programs at the school.

“My dad, he talks with families in Korea who want to come to Andalusia because the people are so nice,” Lee said.

“He is looking for houses now. They all want to come, because we like it so much.”

One might think that losing the love of her life and then discovering she had stage 4 cancer would be... read more