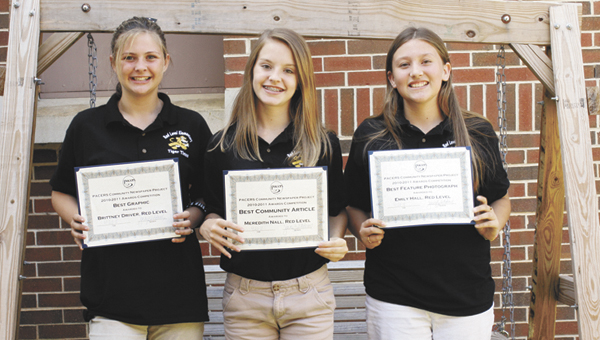 Nall, who serves as the editor of the paper, took home honors in the “best community article” category, for her story “A man who gives so much, yet expects so little,” about Guy Mason, a strong supporter of children and education.

The girls said they were astonished to find out they had won.

“I thought they were talking about someone else,” Hall said.

“It’s an honor to win,” Nall said. “We were in second place in total awards. I had faith in our paper.”

The girls joined the first-year school newspaper, after being chosen for having high test scores, and all love what they do.

“I like being informative, and knowing what’s going on,” said Nall.

Driver said being responsible for ads is a lot of work.

“You have to be prepared,” she said. “And you have to attend most of the meetings, but I like design.”

Hall, whose passion is photography, said she enjoys being able to capture special moments.

“Photography captures the moment,” she said. “By looking at the photo, you can tell what it’s all about.”

And the girls have a vision for where they hope the paper will go, and hope that RLES principal Rodney Drish and Red Level High School principal Johnny Odom can figure out a way to allow them to continue working on the paper next year.

“We want it to be more on the lines of a community/total school paper,” Nall said. “Now we give it away. We’d like to change the front page.”

The Coterie Club of Andalusia invites you and your family to the third annual “Movie Under the Stars” on Sat.,... read more