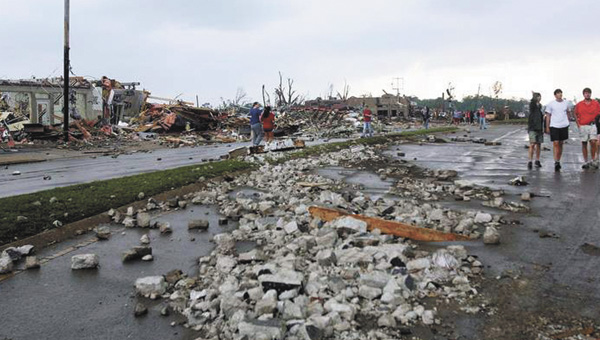 Local agencies have already sent employees to help with recovery efforts in the storm-ravaged areas of Alabama and others are on standby to be deployed.

The City of Andalusia sent an eight-man electrical crew to the City of Cullman, Mayor Earl Johnson said.

“We’re working to put together a water crew to help in Tuscaloosa,” he said Thursday afternoon.

Covington County Health Department environmentalist Terry Kyzar said those employed with the state department of public health have been put on notice that they also could be called upon to respond to the North Alabama’s disaster sites.

“In this case, I work as an environmentalist, so I can fill in for an environmentalist where local employees sustained damage,” Kyzar said. “Think of us as ‘substitutes’ when you’ve got an area that’s been damaged and those employees need to be at home with their families.”

“Different parts of the state have different areas,” he said. “When a disaster strikes, we will pull what is needed – say nurses, clerical, environmentalists or whatever is needed from the area – and send them where they can do the most good.”

At present, Kyzar said he and a local social worker have been put on “standby.”

“Now since we’ve only just begun the recovery process, who knows what and who will be needed in the future,” he said.

He said two teams from the area have already been dispatched to North Alabama.

“Believe it or not, this won’t be the first time we’ve been called out over the last year,” he said. “We responded to the water outage in Wilcox County to purify water and to help to a do a survey of those impacted by the BP oil spill.

“It’s not just disasters that we do,” he said. “It’s any situation where we’re needed.”