She knows her friends are there through thick, thin 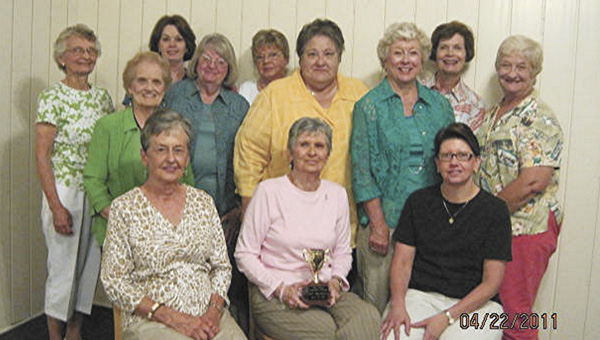 The friends and family of cancer survivor Jan Seymour (front and center) think she’s a ‘trouper.’ Here, they present her with a trophy saying just that. | Courtesy photo

You can always count on your friends, said Andalusia’s Jan Seymour.

After all, she’s got the miles on her car and lunch receipts to prove it.

Seymour was diagnosed in February 2010 in an unusual manner with breast cancer.

“I’d been having some bladder issues, so when I went to visit the neurologist, he elected to do a biopsy,” Seymour said. “It came back that I had breast cancer. Strange, isn’t it.”

Seymour explained that the cancer traveled through the bloodstream into the bladder, which explained her issues.

“If I’d never had a problem or ignored it, things could have ended differently,” she said.

She said from there, it was the usual round of doctors, tests, chemotherapy and radiation.

“It seemed like I went to see every doctor there was in Dothan,” she said. “We had to go once a week for 10 chemo treatments. Once that was completed, I started radiation.”

Those treatments required daily trips to Opp or Enterprise, she said.

“It was very tiring, being in the car plus the treatment,” she said.

Husband Jimmy said the traveling also began taking a toll on him.

“I was driving her back and forth, and I think we could have handled it all because you have to handle it,” he said. “But those ladies, her friends, I can’t tell you how much we appreciate what they did for us.”

So what exactly did the ladies of First United Methodist Church and the Andalusia Women’s Golf Association do?

“Anything you could think of that a friend would do,” Seymour said. “They drove me back and forth to the doctor wherever it was and did whatever I needed them to do.”

“I guess she got tired of me driving, so it gave her someone new to talk to,” said Jimmy jokingly. “When it was all said and done, it was 38 trips to Opp and 30 to Enterprise.”

Just two weeks ago, Seymour finished her last radiation session, and while the couple is hesitant to say she’s “cancer free,” Seymour said she feels great.

“Through it all, I was very tired,” she said. “The treatments take a lot out of you. These ladies were there for me. It’s amazing. Jimmy and I both appreciate it a great deal. We’re very thankful.”

In fact, the group recently held a luncheon celebrating the end of Seymour’s treatments and awarded her a “Trouper of the Year” trophy.

She said she’s looking forward to getting back on the golf course.

Tonight, the Kiwanis Fairground will be filled with inspirational stories, like Seymour’s, as the annual Relay for Life event kicks off. Opening ceremonies are slated for 6 p.m.

Today, Lauren Powell and Christa Holley, as well as countless other University of Alabama students, are mourning the loss of... read more