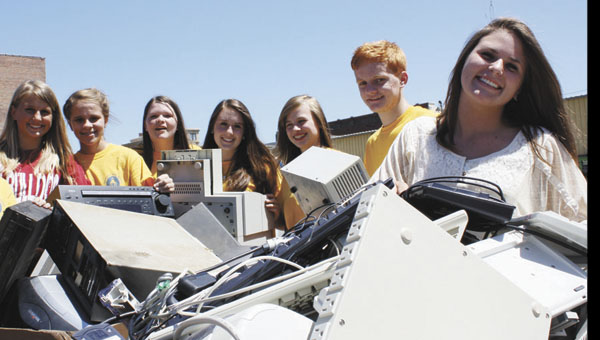 Members of the AHS Key Club helped with the offloading of used items. | Stephanie Nelson/ Star-News

Sponsored by the Conecuh-Sepulga and Blackwater Rivers Clean Water Partnership, in conjunction with the City of Andalusia and Andalusia High School Key Club, the event gave residents an opportunity to rid themselves of unwanted TVs, VCRs, computers or any other electronic items, including outdated cell phones and gaming devices for a small fee.

“We had a wonderful turnout,” said organizer Janet Wofford. “People came with van loads, car loads and truckloads of items. We had participation from businesses such as Ansley Place, CCB, PowerSouth, LBW, the hospital, Walker Business Machines and more who cleaned out and got rid of lots of computer equipment.

The Star-News also participated in the event, disposing of old office and computer equipment.

“And it wasn’t just computer stuff, although that was the bulk of what we collected,” Wofford said. “We had people bring televisions, even big screen TVs and microwaves. Some of the oddest things we got were old record players and radios, even rotary phones.”

The collected items will now be sent to Ecovery LLC, a Loxley, Ala., company that provides recovery solutions for the valuable materials found in automotive and electronic waste.

An Ecovery official, who was on hand for the day’s collections, estimated the day’s take at 5,000 pounds. The event was held at the Andalusia Fire Department.

Caudle out of jail on bond again