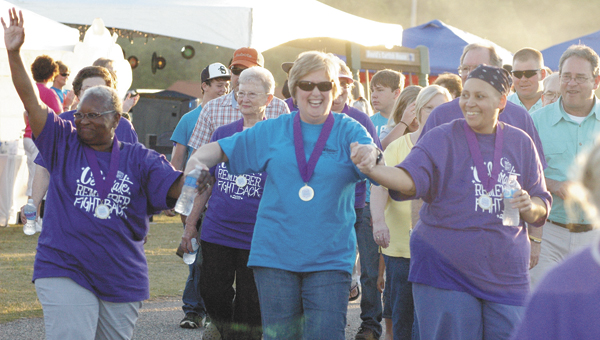 This year’s Relay event featured a 50s theme and survivors, sponsors and caregivers were honored.

Relay Co-Chair Carrie Turner said final totals are unknown for the amount of money raised, but said she expects totals to go above and beyond the $100,000 mark.

“We are hoping to gross at least that,” she said.

Turner commended the community for its efforts.

“The community has been awesome if it wasn’t for them, we couldn’t treat the survivors like they should be treated,” she said.

“I would like to congratulate the Relay for Life for a successful year,” he said.

Patel said that 1.5 million new cancer cases will be diagnosed this year, and that 1 in 3 are at risk for cancer.

“The good news is there are 12 million survivors in the United States,” he said. “We are making progress.”

Patel said there is a new drug on the market that has doubled the success rate in brain cancer.

“We now have a 5-year success rate of 90 percent in breast cancer patients,” he said. “We have tripled the survival rate on colorectal cancer since 1960. People are now getting chemo and radiation in the morning and going to work in the afternoon.”