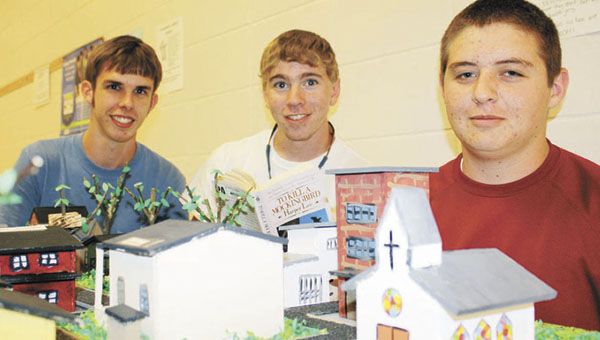 Zach Williams, Chris Gay and AJ Bailey made one of the best replicas of the town. Stephanie Nelson/ Star-News

While “It was the best of times; it was the worst of times,” is probably the most famous line in Dicken’s A Tale of Two Cities, a group of Straughn High School students said it also described their class project for Harper Lee’s To Kill a Mockingbird.

Students in Debbie Parrish’s 11th grade English class have just completed the book, which tells the story of the Finch family and their experiences with hatred, prejudice and ultimately, human goodness.

As an assignment, students are required to recreate the town made famous by the book – Maycomb.

And Zachary Williams, Chris Gay and A.J. Bailey pulled out all the stops when they constructed a nearly 4-foot wide model, complete with tin roofed houses, trees and even Scout’s tree house.

“We wanted to go above and beyond what the assignment was,” Williams said, while Gay joking said, “Yeah, the whole thing working with them, ‘It was the best of times, it was the worst of times.’”

The trio agreed the novel was “a great book.”

“It really makes you think and makes you put yourself in someone else’s shoes and to look at things from their perspective before you judge them,” Williams said.

Parrish said students were given a week to put the project together.

“I would have to say in all my years of teaching, this is the best model I’ve ever seen,” she said. “The purpose of this project is to get students to be creative, to use their imagination. It also builds critical thinking skills – all things that these kids did wonderfully.”

Red Level has joined Brantley in an effort to help the small town of Hackleburg, which was hit by an... read more