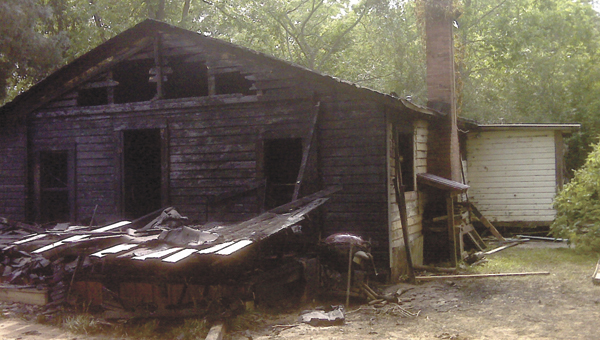 This home on Mitchell Street in Florala was destroyed by fire Tuesday. | Courtesy photo

A Florala woman escaped injury Tuesday when her home caught fire and burned.

The blaze, which apparently started in the kitchen, was reported shortly after lunch.

Florala Police chief Sonny Bedsole said the woman, who was identified as Catherine Pimer, “made it out just in time.”

Units from the Florala Volunteer Fire Department responded to the home, which is located on Mitchell Street. The home was a complete loss, officials said.

“Right after 1 p.m., the emergency phone rang,” Davis said. “We immediately responded to the fire and were able to provide housing for three days and give assistance for food and clothing.”

Davis said the local organization was “even more thankful for the dollars” generated at Monday’s Taste of Covington County event.

“This is exactly what the funds are for to help people who face disaster and be there to assist,” he said.

Diana Boyd is proving doctors’ theories wrong, and will start kindergarten next year, despite her mother being told she’d always... read more