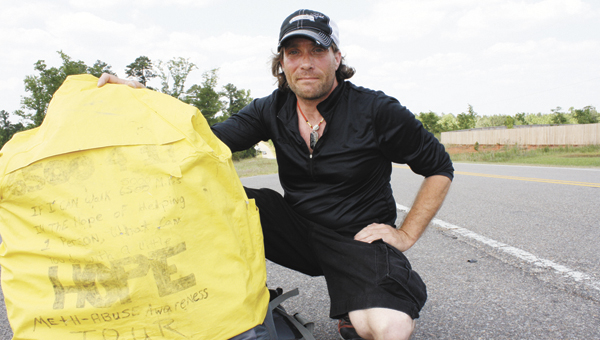 Rik Remus is working on a 6,500-mile trek across the country for a ‘Miles Against Meth Abuse’ campaign. | Stephanie Nelson/Star-News

The miles walked in Rik Remus’ 6,500-mile journey are “Miles Against Meth Abuse,” and with each step, he hopes he can save at least one person from the dangerous, addictive drug.

Remus, who began his trek in October in Boise, Idaho, has been clean for a little more than a year. When 12-step programs did not work for his recovery, Remus said he looked within to find the power to get clean, and this walk was the result.

On Tuesday, he made his way from Opp to Andalusia. Today, he will start the next leg of his journey.

“I started using meth on my days off after working 25-30 days straight,” Remus said. “I wanted to party but I didn’t have any energy. Meth fixed that. In six months, I went from using it on my days off to using every single day.”

After using the drug for seven years, the day came when, “I hit rock bottom, and I knew I had to do something,” he said.

Remus said he had no problem admitting he was an addict.

“But, when I realized that I chose to be an addict, I let the weight of my life fall where it belonged – on my shoulders,” he said.

Remus said he was a “slave to the cruel master called meth.”

“When I told myself that I held the power over feeding my addiction or starving it, I chose to starve it,” he said. “And I succeeded.”

Remus said he began the walk to illustrate his method to a fellow user.

“I told her that I had to demonstrate recovery, not dictate it,” he said. “It was easy to tell people how I did it, but it was better to show people that you can live a life free of the restraints of addiction.”

He said he could think of no better idea than donning a supply-filled backpack and meeting those affected by substance abuse face-to-face.

“I tell people if this 39- year-old man with bad knees can journey across America to show that there is life after meth abuse, then there is hope for others to gain sobriety and separation from whatever substance that is controlling the addiction inside them,” he said.

Remus said oftentimes people see his bright yellow backpack with his message, “If I can walk 5,000 miles in the hope of helping one person, what can you do with a little hope?” and it opens the door for questions.

“And for stories about how their lives have been touched by addiction,” he said. “And it works.”

There is a small team that makes this walk possible, Remus said. His girlfriend, Nichole Kennedy, and the family of Penny and Jeff Vanooteghem and Sydney Hendrix work to raise money, provide logistical support and to develop ways to implement shelter plans for recovery and relapse prevention.

“Really, my intention (with the walk) is to not only reach those along my route, but to also gain an American following, leading a great number of those in active addiction who only need a little inspiration to rejoin life,” he said. “Hope is what I have a lot of, and it is that hope that I want to share.”

Remus will end his walk in San Diego. He walks approximately 20 miles a day, and sometimes accepts rides along the way.

“I’d say about 90 percent of the rides I’ve accepted, that driver has shared how they or someone close to them has struggled with addiction,” he said.

“And I tell them, that’s why I’m doing this – to tell people that substance abuse is a formidable enemy, but not an unbeatable one.”

No distance was too far for Mandy Bradley to go to get her bone marrow transplant. The Andalusia native who... read more