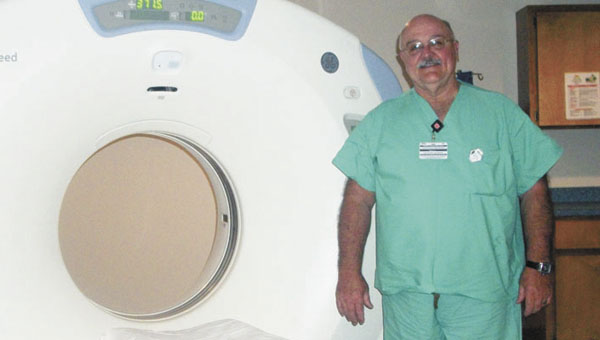 If it weren’t for Dr. Charles Tomberlin, Mike Broussard wouldn’t be a name synonymous with the Andalusia Regional Hospital radiology department.

Broussard said his journey to Andalusia started with a stint in X-ray school in New Orleans at Charity Hospital, the same hospital where Tomberlin conducted his residency.

“He was looking for a Charity graduate,” Broussard said. “One Tomas Castille, who used to work in the department, was going back to school for nuclear medicine and asked if I was interested.”

Broussard said that Tomberlin and his family drove down to New Orleans and interviewed him in the beginning of 1970. The rest is history.

But what’s kept Broussard in Andalusia all these years?

“I’m not sure,” he said. “I guess it’s my work ethic. My parents always drilled stuff into my head. They’d say, ‘Do what you got to do. I get to do a job that I, most of the time, enjoy.

“It’s cool in the summer and warm in the winter, and they let me take ample time off to go shoot Bambi in the winter time,” he quipped.

During the past 40 years, Broussard said he’s seen many changes in the radiology department.

“When I first started there was no such thing as computerized,” he said. “The first X-ray machine was an old Picker machine. It was nothing compared to what we have now. We’re on the fourth in-house CT scanner. Before that, the CT scanner and MRI machines were in mobile trailers.

“It was beneficial for the hospital to purchase,” he said. “And our flow hasn’t let up since.”

But don’t think for a minute that just because Broussard’s been working at ARH for 40 years he’s ready to retire.

“I’m going to stay until they get rid of me,” he said. “Health also has a lot to do with it. I don’t have any set date for retiring. I plan to be here a few more years at least. When Mike (Holloway fellow radiology employee) retires I might consider it. He’s an easy to get along with guy. I prefer not to have someone with a big thumb working with me. I’ve really enjoyed working with Mike. We’ve had good days, and we’ve had bad ones, but we just get up and do it again tomorrow.”

Holloway, who has worked with Broussard for the last 30 years, said, “He makes my job easier.”

The pair ride motorcycles together in their free time.

“But I have no set schedule,” he said. “There’s always something to do.”

Farmers are among those who need rain in order to have a good crop this year. The rivers are down... read more