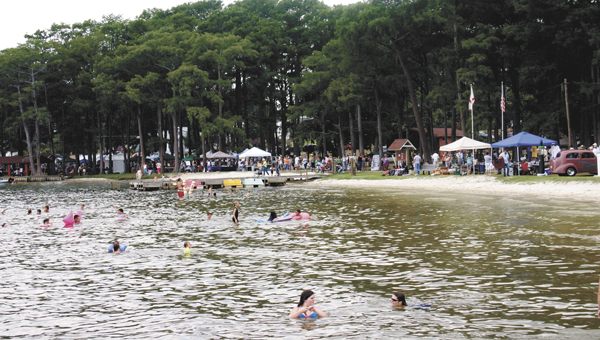 The Alabama State Parks System will cut 54 jobs at the beginning of the 2012 fiscal year – a decision that will mean the loss of one employee each at Florala State Park and Opp’s Lake Frank Jackson State Park.

Additionally, the two parks could be in danger of closing all together in 2013, if revenue-generating methods aren’t successful, said Rep. Mike Jones (R-Andalusia) Wednesday.

In an address to the Andalusia Lions Club, Jones said the state park system is in danger of losing $5 million in funding, if the annual appropriation is not renewed by 2013. That money has previously been used for operating and upkeep on the parks, he said.

In Gov. Robert Bentley’s proposed 2012 fiscal year budget, state agencies face a 30 percent reduction in funding. According to records from the state Department of Conservation and Natural Resources, the agency that controls the state parks, that 30 percent cut will mean the termination of 54 employees system-wide and an increase in fees for various park amenities. On the local level, it also means the closure of Frank Jackson State Park’s office Mondays and Tuesdays year round.

If the rate increase does not yield the extra revenue needed to continue operating all 22 state parks, the department is proposing closing nine parks in 2013, with Covington County’s two state parks among them. .

Those state parks, in order of the proposed 2013 closures, are: Bladon Springs, located west of Thomasville; Chickasaw, in the Marengo County town of Gallion; Bucks Pocket, in the northeast Alabama town of Oak Grove; Blue Springs in Clio; Paul M. Grist in Selma; Rickwood Caverns in Warrior; Frank Jackson in Opp; Florala; and Lake Lurleen in Coker.

However, Jones said Wednesday he and Sen. Jimmy Holley (R-Elba) are currently working on a plan that could prevent park closings.

“There’s a bill – SB 337 – that takes away that appropriation to the state parks and puts that money into the general fund,” he said. “I don’t think people realized the impact state parks to the level that it does.”

Jones said he has scheduled a public hearing on Wed., May 25, to try to convince others to vote against the bill.

“Look at it this way, they just built a $3 million building in Florala to generate revenue, which is the whole purpose,” he said. “It makes no sense to me to shut it down when so much has been invested.

“With all that said, the state is in difficult financial straights, and we have very difficult decisions to make,” he said. “But what people may not realize is that it’s not just about the fiscal loss (at the state government level), it’s about the reduction of the tax base and sales tax revenue on the local level. There’s a much bigger picture involved.”

Jones said he and Holley have been meeting with fellow legislators to discuss ways to prevent the closures.

The legislature has been in recess for two weeks for hearings on reapportionment, the legally required redrawing of district lines after each Census. Jones briefly touched on the legislature’s return next week.

“There are a lot of things still remaining to take care of – specifically, the general fund and education trust fund budgets. I expect those will be tackled pretty quickly.”

Legislators will return to work Tues., May 24. The legislative session is scheduled to end June 9.

Success is a characteristic Riley Watson's and Nick Allen’s parents instilled in them at a young age. And Thursday night,... read more