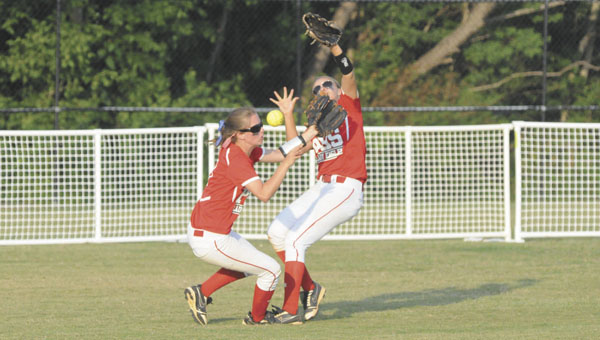 Pleasant Home’s Kaitlin Brookshire (left) and Megan Cook let the ball slip through in the outfield during the third inning to allow an unearned run.

MONTGOMERY – South Lamar scored four runs in the third inning, and that’s all the Lady Stallions needed to drop Pleasant Home 4-3 Friday night in the Class 1A state softball tournament at Lagoon Park.

With this loss, the Lady Eagles dropped down to the loser’s bracket, where they will face Woodville today at 9 a.m. in the bottom half of the bracket.

South Lamar’s four runs in the third inning came on a costly error in the outfield, two walks and one hit.

“We beat ourselves — plain and simple,” PHS head softball coach Bradley Stephens said. “We beat our self defensively. We were every bit as capable as everybody out there.”

Pleasant Home falls to 23-17 with the loss. Earlier Friday, the Lady Eagles beat Waterloo 5-0 in the first game of the day.

Trailing 4-1 in the sixth inning, the Lady Eagles cut into South Lamar’s lead when the Lady Stallions weren’t looking.

Emily Byrd scored on a ground out by Kat Dozier, which signified the second out of the inning.

All of South Lamar’s infield and outfield thought it was the third out, and Byrd got pay dirt.

Brentin Fuller, who pitched 3.1 innings for the Lady Eagles, held the Lady Stallions in the bottom of the sixth to give her team another chance.

The chance came when Abigail Kelley rounded third on an RBI single from Ashley Copeland.

Copeland’s RBI stood, but Kelley was caught in a run-down at third for the final out of the game, which sent the Lady Eagles to the loser’s bracket.

“The last play was all or nothing, and I guess I chose for nothing,” Stephens said. “I told her (Kelley) to check up a little bit too late, but it happens.”

Stephens said he thought Kelley had a good look at scoring the tying run.

“I didn’t think (South Lamar’s Katlyn Bryant) had a good arm. Then she threw it, and I said, ‘oh boy,’ ” he said. “I think we’re going to battle back through the loser’s bracket (today).”

Pleasant Home scored its first run in the second inning on a passed ball.

Taylor Maddox and Kallie Pollard were 0-for-1 each with an RBI each for South Lamar.

Copeland, Cook, Byrd and Fuller, along with the rest of the Lady Eagles, shared in the first-game win over Waterloo on Friday.

Copeland drove in three runs, and Cook drove in one run, while Byrd and Fuller turned in winning pitching performances to help Pleasant Home get the shut out over the Lady Cougars.

In the outfield, running catches by Cook, Brookshire and Kelley tamed the Lady Cougars at bat.

Pleasant Home and Waterloo remained even through the first two innings, but the Lady Eagles struck first in the third when Copeland hit Kaitlin Brookshire in on a ground out.

The turning point of the game came in the bottom of the third inning with two on and one out.

Waterloo’s Carly Scott hit out to right field, where Kelley made the throw to home where Copeland completed the double play.

From there, it was all Pleasant Home.

The Lady Eagles scored one run in the fifth as Kelley came in on an error, scored on run in the sixth on a ground out by Cook and sealed the win in the seventh, driving in two runs on Copeland’s double.

Molly Orrick was 3-for-3 for Waterloo.