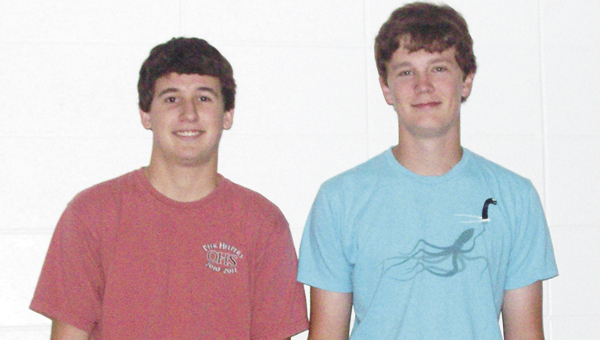 For Opp’s Justin Ferguson and Nick Hampton, learning that they were the valedictorian and salutatorian was a culmination of 13 years of hard work.

“When I was growing up, my folks always taught me to work hard,” Hampton said. “And that’s what I’ve tried to do.”

Ferguson said making good grades is something his parents instilled in him.

“My parents always put it in me,” he said. “I’ve always tried to do my best. I felt blessed that I was gifted in this area.”

Both boys were extremely excited about the news; however, Hampton said, “I think my parents were even more excited.”

“It’s just that I’ve been working hard to get this throughout high school,” he said. “My parents have pushed me, and the teachers have explained things thoroughly.”

Not only have they excelled in their studies, both were active in school activities and church ministries.

Both were members of the OHS Peer Helpers and Westview Baptist Church missions to New Orleans and Jacksonville.

Hampton is the student praise and worship leader at Westview, member of Mu Alpha Theta, Beta Club and FFA.

On Thursday night, the boys will go their separate ways as OHS holds commencement exercises at 7:30 p.m.

After graduataion, Ferguson will attend Auburn University in the fall, but is undecided on his major, while Hampton will travel south to the University of Mobile to major in worship leadership.

OSHA is stepping in to investigate an industrial accident at the Enterprise Lowe’s that left a man dead Friday morning.... read more