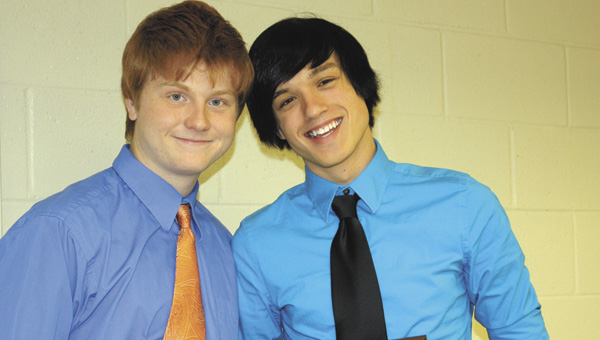 When Vincent McNemar moved from New Jersey, Brian Sherman was the first person he became friends within Red Level.

Now, the two will walk across stage at tonight’s graduation as salutatorian and valedictorian.

Both boys said making good grades was a key goal for them, but each had a different reason.

For Sherman it was the opposite.

“Mine was more of a personal goal,” he said. “I always set higher (goals) than possible. My parents were supportive. They pushed me by showing me examples of why I should push myself.”

McNemar and Sherman said they have always been competitive, but it was never overbearing.

When the duo found out they had earned the recognition of valedictorian and salutatorian, they were ecstatic.

“I was pretty happy being name valedictorian,” McNemar said. “All the hard work we did, we finally get recognized in the end.”

“I can’t believe all of my hard work paid off,” he said.

While not studying to keep their 4.0 GPAs, the pair were busy with a long list of activities.

The two will go their separate ways after tonight.

McNemar will travel south to the University of South Alabama, where he plans to pursue a career in medicine.

“I’m not sure what kind of medicine, just whatever sparks my interest,” he said.

He has a full ride thanks to service in the Reserved Officers Training Corps (ROTC).

Sherman will attend Wallace Community College, where he’ll major in nursing. He, too, has a full scholarship.

“My plans are to get my bachelor of science in nursing,” he said. “Then who knows what I’ll do.”

The cities of Andalusia and Opp will be closed Monday for the Memorial Day holiday. In Andalusia, garbage and recycling... read more