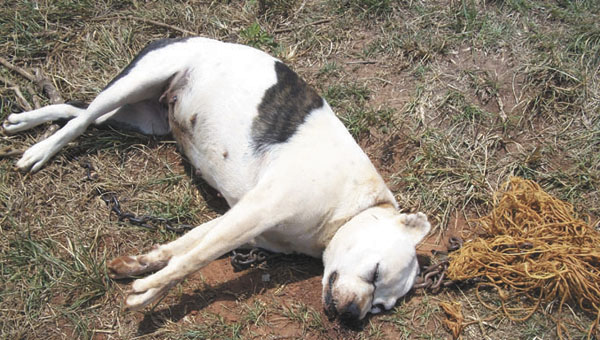 This bulldog is one of the numerous dogs Hall is accused of starving.

An Andalusia man is facing nine counts of animal cruelty after he allegedly left numerous bulldogs without food and water.

“From the complaints and deputy reports, Mr. Hall was (allegedly) keeping the dogs there on a family member’s property without food or water,” he said. “At two different times, deputies found one of the dogs deceased and still on the chain.”

Hall was arrested and taken to the Covington County Jail where he was held on a $27,000 bond.

Cruelty to animals is a Class A misdemeanor.

Meeks said the City of Andalusia’s animal control officers assisted in removing the animals from the property. The dogs are now being cared for at the Andalusia pound.

“Cruelty to animals is just as a bad, if not worse, than cruelty to a human,” Meeks said. “Animals can’t fend for themselves. Chaining them to a fence and leaving them, it’s just sad, and we’re going to take the appropriate actions to deter the problem of animal cruelty.”

Zoza Grace Spears and Garrett Sasser, Andalusia High School’s valedictorian and salutatorian, are ready for the next chapters in life.... read more